Aubrey Nye Hamilton: Take It Back by Kia Abdullah 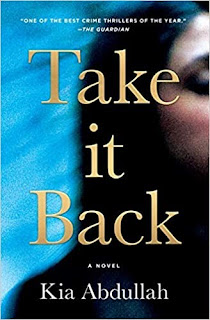 In my quest for new-to-me women crime writers, Kia Abdullah, a British author and travel writer based in London, came to my attention. She has a university degree in computer science and worked in the technology field for a few years before turning to writing. She has been published in The New York Times, the Guardian, the Telegraph, the BBC, and the Times. She established Asian Booklist, http://www.asianbooklist.com/, a website that promotes British-Asian authors. Asian Booklist monitors traditional publishers for frequency of appearance of its constituency, just as Sisters in Crime monitors the publishing industry for the appearance of women authors.

Her first book Take It Back (St. Martin’s Press, 2020) is a searing courtroom thriller that highlights issues of sex, race, culture, and social justice. Zara Kaleel, the youngest daughter of Muslim immigrants, walked away from an arranged marriage to the great distress of her family. She threw herself into her legal career until she decided she wanted to be of more meaningful service. She took a legal position with Artemis House, a center supporting sexual assault and abuse victims.

Jodie Wolfe is a facially disfigured and disabled teenager whose alcoholic mother ignores and neglects her. She reports that she was raped by four teenagers from her school. She is white and the four boys are Muslim. Zara is viciously attacked by the Muslim community for taking sides against the boys, creating an even greater rift between her and her family. The courtroom testimony, ripping Jodie and the boys apart in full view of the world, is wrenching. The ending is nothing short of shocking.

This story highlights the contemporary Muslim culture in England. Multiple surprises popped up, even when I thought no more could be fit into the plot. The supporting characters are excellent: Zara’s confused but loving mother, Artemis House investigator Erin Quinto, and Detective Constable Mia Scavo from the local police force.

This story is as much disturbing social commentary as anything else: the difficult lives of Muslim women are described in hair-raising terms. The damage that social media can cause is personified as Jodie is savagely pilloried in online forums. The disparity between acceptable male behavior and acceptable female behavior that transcends any one race or religion is relentlessly emphasized. Not an easy read.

Named one of the best thrillers of the year by the Guardian and the Telegraph. Starred reviews from Publishers Weekly and Booklist. For crime fiction buffs seeking to broaden the diversity of their reading, anyone interested in contemporary social justice, and legal thriller fans.

Not for anyone who is triggered by descriptions of sexual assault.