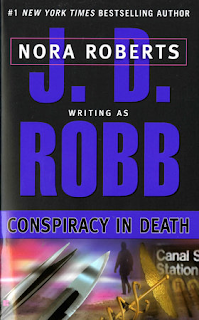 Conspiracy in Death opens in January 2059 and technology drives nearly everything. As always in every society, there are the haves and have nots. The haves have the access to needed medical care and can avoid cancer, catch diseases early, and live lives far beyond the current normal life span length. The poor do not have that ability as money always drives everything.

For the homeless in New York, the January cold brings with it an extra burden. The extreme cold means that some slip from this mortal coil real during the dark and cold hours. A death of a homeless person from the cold would not normally call for NYPSD Homicide Lieutenant Eve Dallas and her assistant, Officer Peabody, to respond to the scene. However, this is not a normal death of a homeless person.

Upon arrival, it is clear that the scene is not being managed properly by Officer Bowers and her rookie trainee, Officer Trueheart. Once Dallas gets that addressed, she turns to the reason for the call. The man known as “Snooks” did not have much to steal in terms of possessions. The killer or killers left his tent and the few items he had. They did take something he literally could not live without. They took his heart and did so with surgical precision.

What follows is a complicated case of murder, organ harvesting, and more. All the usual caveats apply as the head hopping pov, sometimes multiple characters in the same paragraph, graphic sexual content, and others apply here. This read is also just flat out fun and entertaining just as the previous books in the series. As long as you, the reader, do not take the books seriously, they are a fun and fast read.

My copy came via the good folks at my branch, Lochwood Library. Scott, once again, made the Libby App work for Dad.