Sample Sunday: Excerpt from Hold Me Down by Clea Simon 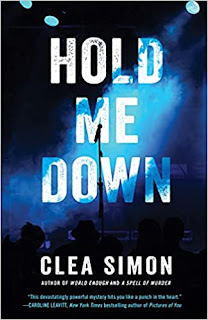 Mystery author Clea Simon is following up her recent guest post with an excerpt today from her new book. Hold Me Down is now out on eBook format with the print version scheduled to be released by Polis Books on October 19th.

Ten songs in and she stumbles, her tongue tangled in a lyric she should have down by heart. So much for hubris, Gal tells herself, struggling to get back in sync. To get back on the beat, fingers moving one-two one-two over the thick bass strings. So much for aging.

Lina, her guitarist, looks over, the slight rise of her eyebrows as eloquent as the fill she plays to cover. She’s fast—all metal and speed, still—and she hangs on the last barbed note, stretching it out as she waits for the high sign, the cue from Gal. A stadium move, but it has the crowd cheering.

It’s been years since Lina’s had to do that, Gal realizes, chagrined. It’s been years, period. In response, Gal grabs the mic stand, pulling it closer with her left hand while her right keeps the rhythm, thrumming away on the open E. The move centers her. She stands a little straighter, and then she’s back. Belting out the chorus she knows as well as the tattoo on her wrist—an F clef, faded blue—as the song pours out of her, the words coming easily now. Winding up to the hook. The line with the hiccup. One extra beat that makes the rhyme different. Makes it stand out.

She sees that now. Feels the crowd inhale in anticipation as she rounds into the chorus for the reprise, once again in time with Lina and Bobbi Jo. She’s learned a lot about songwriting in the last twenty years. Knows the tricks that turn a pop progression into an earworm. Wields them at will when she sits down at the piano. Or tries to, anyway. She hasn’t had a hit like this one, written by instinct, since then, but she’s done all right. And tonight, well, tonight is all about revisiting the past.

A brief pause between numbers. Lina’s changing guitars; Barry acting as her tech as he runs out with the Strat. Gal takes a moment to eye the crowd, really check them out, before Bobbi Jo counts off the beat. She doesn’t need the set list. None of them do. They’re not doing anything new tonight, and the progression is obvious—one song to the next. She hears the tick-tick-tick of Bobbi’s sticks and the feedback begins to growl. Breathing deep, from the belly, she steps back up to the mic stand and once more begins to sing.

It shouldn’t be automatic. Not tonight, and certainly not after that memory slip. Still, Gal can’t help drifting. Maybe it’s the crowd. Too many familiar faces missing; too many gone for good. Maybe it’s the venue. After years of smaller clubs—coffeehouses, mostly—she’s forgotten how far back the Ballroom goes, its rear corners shrouded in darkness. The houselights are down, and she can guess how she looks—how the band looks—from out there, so bold and so bright. Older, sure, but tough with it. Initiates. Blooded, in ways they can only imagine.

What those upturned faces don’t suspect is how much is visible from up here. She can see almost everything from the stage, back into those dark corners, and in the touring years, she did. Fucking, fighting. The crowd as oblivious of her gaze as they are connected to her, as if she were, in fact, some kind of dispassionate god. The way they want her, up here, high above them. The power of it. Pure sex, drawing them to her still. The control.

She closes her eyes then. Tells herself she wants to concentrate. To be in the moment, for this number and the one that comes after. The big climax, Aimee’s song, the reason they’re all here tonight. Bobbi Jo plays the opening roll. Not Aimee—who is?—but steady, with the hi-hat offsetting the big bass beat. And then it’s time.

Gal waits for the surge of emotion that comes when she sings her old friend’s lyrics. “A different kind of love, but it’s got me.” It always takes her hard, leaving her wired and jagged after. “Different, sure, but right.”

Memories of touring, of doing these songs night after night. Of Aimee, a monster on the set, her shoulders mounded with muscle. Lina to her right. The women who came before, who came after. Musicians and mates, all blending together now. That must be why her mind is playing tricks on her. Why she would forget the words to “Hold Me Down,” her own breakthrough song, the one that made the band. Why she would think, for a moment, that she saw a face—his face—shining up, pale and sweat-slick, from the middle of the heaving crowd. 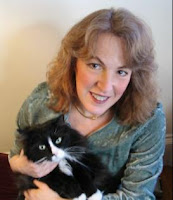 Author of the Witch Cats of Cambridge, Theda Krakow, Pru Marlowe pet noir, and Dulcie Schwartz series, as well as the standalone World Enough and Hold Me Down, Clea Simon is a writer, journalist, and avid reader. Her new psychological suspense, Hold Me Down, published by Polis Books, comes out on October 19th in print and October 5th in eBook. She’s at http://www.cleasimon.com