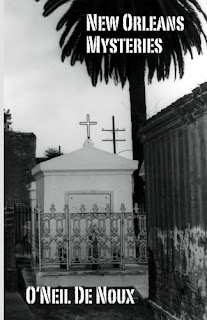 Originally published in 2009, New Orleans Mysteries is an interesting collection of tales featuring signature characters from the mind of O’Neil De Noux. The stories move back and forth in time while showcasing the city the author loves---New Orleans. A city of complexity built on a violent past and a swamp that never should have been messed with, New Orleans is a city that continues to survive as Mr. O’ Neil De Noux notes in his introduction to the book.

The stories themselves start in June 1891 by way of “Maria’s Hand: A Jack Dugas Mystery.” Detective Jack Dugas has been called out to a station house along the New Basin Canal. An abandoned steamer trunk is inside the station. Along with the clothes in the trunk is a human hand. Clearly, a woman’s hand with the red fingernails and a wedding hand on the ring finger. The trunk was found that morning by an elderly man just after dawn next to a nearby road. He took one look and alerted the local police at the station. Who she was and how she died as the wound indicates the removal of the hand occurred after death are just two of many questions Detective Jack Dugas has to solve.

The next tale is also one featuring Detective Dugas and is set about a month later. Two bodies have been found in a town house at 77 Toulouse Street. As any possible witnesses would only be able to speak French, the man known as “The Frenchie Detective” is on the case. In “The Gold Bug of Jean Lafitte: A Jacques Dugas Mystery” has a murder case to solve that has links to a search for the treasure of Jean Lafitte.

Private Detective Lucien Caye is quietly reading the paper in his office one morning in early June 1948. A young boy, about ten years old, busts into his office upset about a dead lady down the street. He and a buddy were tossing a football when one of them threw it over a fence. One of the kids went to go over the fence for the football and saw the dead woman. In “Guilty of Dust and Sin: Lucien Caye Private Eye Mystery” the police as well as Lucien Caye work their own investigations to determine what happened and why. Good thing Lucian Caye is involved as the police have quickly solved the case and chosen the wrong suspect.

“The Desire StreetCar: A La Stanza mystery” tells the tale of a legendary street car that became a dumping ground for the mangled body of a prostitute. She went by the name “Xanthe” and worked out of an apartment over a religious bookstore. La Stanza had recently met her and saw beyond her job as she did with him.  She also was trying to help him find out some information on who killed his brother, Joseph Anthony Stanza.

That brother is the main focus of the next story titled “A Heartbeat.” There is no possible way of explaining anything from this short story without ruining it. A reviewer’s job is never to review a book or a short story in such a way to release a detail that ruins the read so that will not be done here.

“The Man with the Moon Hands: A La Stanza mystery” follows next where La Stanza first met the deceased a few years ago. That might have been classified as a good shooting if things had gone a different direction. They didn’t that night in the Sixth District three years ago, but in the here and now the story ends. 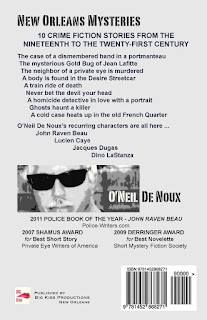 Coleman Hay needs to die. How to do it is a major part of “Bet the devil.” Writing a play is easy as compared to orchestrating an appropriate murder.

“The Portrait of Lenore X: A John Raven Beau Mystery” marks the first appearance in the collection of John Raven Beau. It is May and New Orleans has already had its 110th murder case. Lenore Xaiver, aged 22, was shot in the chest and killed. Who did it and why are two of the many questions NOPD Detective John Raven Beau has to solve.

In “Except for the Ghosts” Donald Tice has plans to kill a woman. It isn’t personal. It is a job and thirty year old Paula Lewis, part owner of Love Craft antiques, is the target.

We move on to 2027 in “So Napoleon Almost Slept Here, Right?” Detective Brouillette is in the French Quarter working a cold case as a member of the “Unsolved Murder Squad.” Ten years ago man was murdered in The Napoleon House and the manger now isn’t going to be a lot of help unless he can talk her into it.

While New York publicly lays claim to be a city that no one ever sleeps, New Orleans prefers to be quietly mysterious. Something that author O’Neil De Noux captures perfectly in his ten highly atmospheric mysteries. With the city of New Orleans and crime as the anchor points, the author moves the reader across time skillfully brining each setting wonderfully alive. The result in New Orleans Mysteries is a read that pulls you deeply away from the modern world.

I picked this up back in August 2013. I don’t remember now if that was during one of the authors giveaways or not. Amazon does not make a distinction between books I pick up during a free giveaway as they designate those books as “purchased.” If I did buy it, I did so by way of funds in my Amazon Associate account.

I've yet to read one of his collections, which is an oversight on my part, as I've enjoyed his stories as they appeared in PULPHOUSE and its sibling magazines (including one featuring New Orleans-based fiction), and the occasional anthology appearance since. Thanks for the nudge.

I have a bunch of the PULPHOUSE issues and other things involving him to be read. So very far behind all the time.