October 1964 and for Marjorie Trumaine the unthinkable has happened. No, her beloved Hank is still alive, paralyzed, and holding his own. He still wishes that he had died in the shotgun accident, but she is thankful he is still around. Despite the brutal events in See Also Murder, life on her farm in rural North Dakota has continued and she is managing to hold things together. The Knudsen boys, Peter and Jaeger, continue to be a huge help to her, but they can’t make the rains come. Rain is the lifeblood of any farm and Marjorie needs it to rain. Indexing helps pay the bills, but that job can’t totally support the farm. 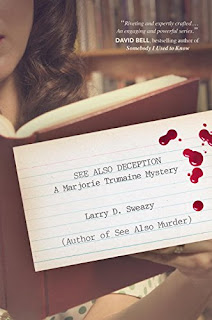 Unfortunately, her powers to hold things together are tenuous at best and do not extend to the town library. Calla Eltmore, librarian resource when Marjorie has a question as well as a longtime friend, has been found dead at her desk in the Dickinson library. Marjorie is devastated by the news and can’t believe it. Not only the fact that she is dead, but the police seem to think it was by suicide.

Despite voicing her misgivings, she can’t seem to get anyone else to listen to her. Even when she spots a clear clue that the police should have figure out.

The death of Calla is one of several storylines at work in this complicated and very engrossing read by author Larry D. Sweazy. Building on the character of Marjorie Trumaine as well as several other ones, a complicated mystery read full of rich details is constructed. Readers are again exposed to the difficulties of rural farm life in the early 60s in North Dakota, Marjorie’s duties as an indexer, living in a place where everyone knows your business day and night, and numerous other themes and angles in this complicated mystery. See Also Deception: A Marjorie Trumaine mystery building on the first book and is a very worthy second book in this intense mystery series.

Highly recommended, as is the first book, See Also Murder. Because those events are referenced in this read, it is also recommended that readers new to this series start with the first book.

Both the author as well as the publisher, Seventh Street Books, supplied review copies for my use to read and review.

By coincidence, I just read this one a couple of weeks ago and was quite taken with it. I hadn't read the first one, but I am now within about 50 pages of finishing it. The period details are so well done and Marjorie is a fully realized character. I had read a favorable review somewhere but wasn't prepared for how rich this story is. I love all the little details. . . the constant wind, the surprise that a dog is allowed in the house, the party line, and so forth.

As the only reviewer who matters and who uses the best words....the best ...many people say my reviews are the best.. ...I am sure you saw my favorable review.

It is one heck of a series.