FFB Review: Stuff To Die For by Don Bruns

Back in September 2007, I told you about Stuff To Die For by Don Bruns. I thought it could easily be the start of a very good series. It was. Like any good series, you really need to start with this one. Make sure you check out the full list of reading suggestions over at Patti’s blog. 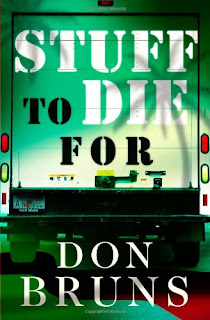 James Lessor and Skip Moore have been friends since childhood. James has always been scheming on ways for the two to make a fortune in business and Skip has followed along into each venture. Some schemes had gotten them into trouble, some hadn’t, but none of them had really worked. The latest plan James has hatched has them going into the moving business. “Have Truck Will Haul” says their new business card and according to James, who has purchased the Chevy one ton box truck by using the monies he recently inherited, this idea will lead to a financial hauling empire. Not only should he have used the monies to pay on his student loans, Skip also thinks that James should have noticed the fact that the truck drinks oil like it is water. James is obvious secure in his belief that the only way to make real money is to spend the money he has and this time, he is going to spend it on his hauling stuff business idea.

Skip’s girlfriend, Emily isn’t thrilled with James or how he manages to lure her mid twenties boyfriend into one dream after another as Skip sort of drifts through life. Sure, he sells a security system now and then on commission, but he really isn’t going anywhere and she believes he could do so much more. One possibility is that Skip could go work for her Dad’s construction firm but Skip knows, for a number of reasons that all aren’t under his control, why that idea would never work.

As it soon happens Emily leads the guys to their first client, Jackie Fuentes. A wealthy and sexy woman living behind the gates of a nearby exclusive community, she needs some stuff hauled away as quickly as possible and is willing to pay well. Her husband Rick has taken off with a far younger woman and she wants his things out of her house.

It should be a simple job for a few hours of work. It would have been a simple job if James, while backing up the truck at the storage facility, hadn’t hit the building. If, the load which includes mail for Rick, hadn't shifted and spilled. If they hadn’t noticed the fact that one of the envelopes was leaking. Or, if having noticed it was leaking, tossed it back with the rest of the mail and had never opened it.

But, they did notice and did decide to open the envelope. From there, things go from bad to worse at breakneck speed. James and Skip find themselves getting deeper in a mess with every move they make while agents of the CIA, Cubans bent on arms smuggling, and a host of other shady characters with multiple motivations, keep among other things, shooting at them. All that and Emily really needs to talk to James about the future of their relationship.

Part humor, part mystery, part thriller and definitely all suspenseful, this novel takes off and just keeps going barely letting the reader catch a breath on the way. Author Don Bruns brings all the characters vividly to life and yanks readers directly into the maelstrom that is their chaotic world. What could easily have gone the way of caricature and been the typical buddy style novel instead is a very good tension filled read packed with twists and turns guaranteed to keep readers guessing to the very end. The result is excellent stuff on every level and hopes that this just might be the start of a new series.

Sounds like it would fit "Dude" Lebowski and Walter Sobchak to a T.

Think they would have been too old. I thought that Vince Vaughn got and the blonde guy(blanking on the name) who he did a couple of movies with would have worked way back when I read it.