Friday means Friday’s Forgotten Books hosted by Patti Abbott.This week Todd Mason is collecting the links and will have them over on his Sweet Freedom blog. 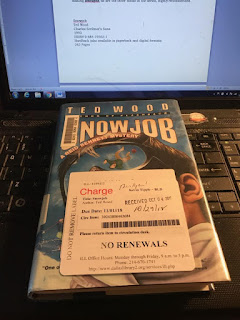 Reid Bennet is always willing to go help a friend.  In this ninth book of the series titled, Snowjob, that willingness takes him to chambers, Vermont. While Reid Bennett was an odd man out because of his history when he arrived in Murphy's Harbour, Doug Ford is going to always be the odd man out on his local police force because he is African American.

He also is odd man out because he sits in the local jail accused of the murder Cindy Laver. She was the bookkeeper at the local ski resort. Not only was he there in her apartment the night she died, fifty thousand dollars she was to take to the bank and deposit was also found in the back of his car. Then there is the fact that nearly everyone around knew they were having an affair before Ford killed her.

While the evidence points to Ford being a killer, Ford swears he didn’t do it. Reid served with Ford in Vietnam and there is an unshakable bond there. A bond that will be tested as Reid investigates and learns what is actually going on a case that leads from small town murder to big time issues.

I got to read this one by way of an Interlibrary Loan from the Beaumont Public Library in Beaumont, Texas.

I still haven't gotten on board with Ted Wood, Kevin, but you're wearing down my resistance! This sounds like a pretty good read.

Your resistance is futile. get your eyeballs out of Russia and go to Canada. They even have legal weed now.