FFB Review: Monkey Justice And Other Stories by Patricia Abbott 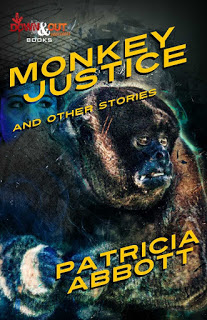 Back in October 2011, Snubnose Press published a collection of stories titled Monkey Justice: Stories. It took me quite a few months to get to it with everything going on here at the time, but I finally did and reviewed it in May 2012. As you may have seen elsewhere this week, the book is back in print thanks to a news publisher, Down & Out Books. The title is slightly different too as the collection of stories is now titled, Monkey Justice And Other Stories. From what I have read elsewhere review wise, it is still the same great read I told you about back in 2012. So, it seemed only fitting that I tell you about it again as part of FFB hosted by Todd Mason. Make sure you check out the full list of reading suggestions today over on his blog.

Noir comes in many forms and nuance. Monkey Justice: Stories is composed of stories that have no easy answers on how to classify them. They live in a shadowy land where things are open to interpretation, not easily summed up at the end of the pieces, and offer a glimpse into lives already stressed by poverty, abuse, and other circumstances. The ways these characters deal with situations are driven not by societal expectations, but by their own personal frame of reference.

The book opens with “Like A Hawk Rising.” Thanks to an injury on the most recent job, Bernie is home and stuck there while Marsha tries to take care of business. It isn’t like they don’t have problems of their own, but what is going on next door is really beginning to upset Bernie.

Bob Mason knew something had happened to Lillian Gillespie in “Sleep, Creep, Leap.”  The new neighbor is going to be way more interesting than Lillian ever was over the years. Whether she is really worth his interest remains to be seen.

Dreams are just part of the deal in “Bit Players” where not everyone can be a star. When you are a player in someone’s dream there are no retakes. You have to do it right the first time. When something goes wrong the subject wakes up.

Things are really bad when your brother prostitutes your sister to save the house. That is what happened in 1931 in “The Instrument Of Their Desire.”  That may have saved the house, but it changed everything.

“Hole in the Wall” features an out of work guy by the name of Martin on vacation in Europe thanks to a fat severance package. He is only 28 and yet can’t seem to make any kind of connection with anyone. Martin deals with the problem in various ways and not all of them are legal.

Daddy has not been around in more than a decade.  Prison time will do that. In “Escapes” Rex Knight has returned to the free world in Northern Indiana and things are going to change.

Rufe has not finished breakfast and already Georgie is outside waiting in “Georgie.” Rufe’s mom is doing what she has to do to supplement the family income. At 12 years old it is a good thing Rufe has a friend in Georgie.

Superman dealt with the awful Dave in “My Hero.” She keeps telling them what happened, but the police don’t believe her.

The title story “Monkey Justice” follows next. Cheryl never knew her husband was cheating on her. She never knew he had fathered another child at the same time she was pregnant. Delivering two weeks late meant that now she knows the extent of his betrayal. Nothing will ever be the same.

“On Paladin Road” a couple of the neighbors have sort of bonded over antique guns. One writes about them. The other one collects them. Another thing that brings them together is their age and the future is not looking too bright.

Margaret Olson has returned in “What Happened Next.” Patrick agreed to meet her for lunch and has no idea what she wants. She always had the power over him to get him to do things before she left. Her name may be different now, but she wants to pick up where they left off years ago. It is far too late for that as the years have changed everything.

Korin speaks in “Tongues” late at night and what she says clearly isn’t joyful. The ability to speak in tongues is fairly rare in society at large. It certainly does not happen at Southern New England Bible College. Other things she does would cause even bigger issues if they were known.

Life in a nursing home is the backdrop to “The Tortoise and the Tortoise.” George knows what goes on in the nursing home and isn’t happy that his status has slipped now that Father Ryan has arrived. Something has to be done.

Something also has to be done in “The Squatter.”  The squatter next door, Gerry Upson, wants to borrow her phone and maybe something more. He made Annette Mueller uncomfortable at first¸ but now she feels something else.

In “The Trouble With Trolls” Dad wants Patrick and Denny to pick up a woman at the airport.  Dad has plans and expect his sons to do what needs doing.  Hopefully it won’t be as bad as the last time.

The interstate makes the commute to work much faster though it brings back bad memories. He would rather take the long way in “A Saving Grace.”  Taking the long way will have its own consequence.

Like a lot of the stories in this book the narrator of “Girl Of My Dreams” is trapped in a prison of his own making. So he keeps going to work for a man he hates, making a sixty mile commute he hates, and watching his life pass on by because the alternative of starting over somewhere else is just too much. Of course there is a woman involved.  A woman who will need Randy’s help.

The photographs freelancer Violet take at first in “Raising the Dead” don’t really work. They are missing something and don’t really reflect the real Detroit. The Detroit one can see just by looking over the window. 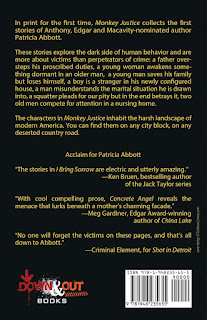 I was with Joe Piney way back when and now “I Am Madame X’s Bodyguard.”  I used to be somebody that others feared and respected.  At 50 plus times change and certain allowances have to be accepted.

Melissa has spotted a target in “Catnap.” First really good one in weeks and she plans to take full advantage.

Plagiarism is the problem in “RE: University Protocol On Incidents Of Student Plagiarizing.” Some students just don’t get it and will go to extraordinary lengths to make their point.

Things are far different for Ben in California than back in Portland with his mom. In “Souris” readers learn a few things about Ben, his dad, and the step mom’s family. “The Frenchies” are back and it is going to be a long summer visit.

This collection of stories features primarily characters living on the edge of society. On the edge of society in the terms of financial status, moral compass, and occasionally even sanity. What unites them is a search for justice. In each case there is a need for justice--either perceived or in actuality in the world of the story. What they perceive to be justice can have disastrous and often fatal consequences.

If you want to feel uplifted and hopeful for humanity, this book is not for you. If you notice the neighbor looks at you funny or you realize you might be the one looking at somebody else funny, this could be the book for you. These twenty-three stories are not only powerfully good; they will continue to mess with your head long after you finish the book.

PDF supplied by the publisher quite some time ago in exchange for my objective review.

Thanks so much for reading the stories so thoroughly, Kevin. A great review. I am so lucky in my friends.

Thanks for the comprehensive review, Kevin. I downloaded the Kindle version just yesterday, and am looking forward to reading it.