Please welcome Sandra Ruttan with her first guest post here on the blog. My hope is that this post is the first of many from Sandra. In addition to her various books, Sandra Ruttan is now a submissions editor for Bronzeville Books. They are planning their first anthology, Illicit, and are seeking submissions at their website. You can learn more about the anthology as well as the books Bronzville Books is seeking by reading the interview below with Renee Asher Pickup 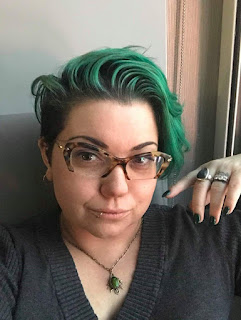 SR: First, who is Renee Asher Pickup? Tell us a little about yourself.

RAP: Whenever I have to answer this question it triggers a small existential crisis. So first, I’ll say I’m the kind of person who regularly jokes about existential crises, because I’m almost always in the middle of one. Professionally, I’m the acquisitions editor at Bronzeville Books, one of the editors for the Shotgun Honey website, and a crime fiction writer and essayist. I’m also a Marine Corps veteran, a mom, a green haired old punk rocker, and obsessed with the movie From Dusk Till Dawn (really).

SR: How did you become Bronzeville Books' acquisitions editor?

RAP: I’ve been friends with Bronzeville’s founder, Danny Gardner, for years. We’re both writers and passionate readers, so every time we got together we were talking about writing, publishing, what makes good stories, what stories and voices we felt were missing from the genres we loved. Without either of us realizing it, I guess he was putting me through a multi-year job interview.

When he called me to tell me what he was doing and asked me to be involved, I said yes immediately.

SR: What is it about Bronzeville that made you want to get involved?

RAP: Bronzeville has a really electric and exciting energy, and we’re focused on stories and authors that have strong voice and new perspectives. It’s a view of  publishing that really delivers for the authors and puts the time, money, and effort into the books we believe in. Who wouldn’t want to be involved in that?

SR: You're the acquisitions editor for a new publisher that is considering works in all genres and most age groups. What will it take for works to stand out to you so that you'll fight to publish them?

RAP: More than anything I’m looking for heart. As an acquisitions editor I need “page turners” and stories I can sell -but there are plenty of heart stopping thrillers, deep space sci fi stories, and bank robbery novels that have something to say inside the tight story and genre conventions.

I really want works that bring up new or underrepresented view points. Is it going to show me something about the world I wouldn’t have seen otherwise? Is it going to be a book for a reader somewhere who has never seen their perspective represented before? Maybe it’s a story that’s been told a thousand times before but this writer is telling it with a new take, digging a little deeper, finding the meaning inside of it.

It might sound really artsy but I want to be moved, and I want to see work from people who are trying to do something different.

SR: One of the first projects you're working on is Illicit. Where did the idea come from?

RAP: Danny brought up the idea of a crime themed erotica anthology and I jumped all over it. I love sex. I love writing about sex. I love reading about sex. There’s a weird divide in most writing circles where people just don’t feel comfortable including sex. It happens off the page, or it happens in a quick three lines. But if a writer can tell me things about a character based on how they order and eat a pastrami sandwich (and a good writer can), then they can certainly do the same with a sex scene. I want to rip the bandage of that taboo. More sex!

Then I had to ask what made an erotica anthology a Bronzeville book. We got into these discussions about what kinds of relationships, bodies, kinks, and people the average person is exposed to if they’re buying mainstream books or viewing mainstream love stories on film and TV. I thought about erotica writers I’d spoken to who talked about how difficult it could be to place stories that were queer or kinky and friends who talk about how they often feel like media insists that they are not sexual or sexy because of disability, size, race, etc. So we decided to stick all of that in the submission call. When you pick up this book, it should turn you on, make you eager to get to the end of the story, but it should also expose you to sex and relationships you aren’t used to seeing.

SR: Do you hope that having Illicit as Bronzeville's first anthology will help encourage writers to submit edgier fiction?

RAP: I hope it shows writers that Bronzeville is really open to anything that moves us. We’re not drawing any lines in the sand.

SR: How do you think projects like Illicit help define Bronzeville's platform?
RAP: Bronzeville is all about breaking down the dividers. So Illicit is a crime fiction anthology that is also an erotica anthology. We’re drawing writers from both genres and mixing them together. Bronzeville is not going to do an LBGTQ anthology, and then an anthology featuring disabled people, and then one for people with kinks - we’re taking the absolute best stories we can find featuring all kinds of people. No dividers, no subgroups. Bronzeville is a neighborhood. We all live here together, everyone’s invited to the block party. There’s no sign on the door telling anyone to stay out or come back later.

SR: Nikki Dolson is Bronzeville's first signed author. What made you want to work with Nikki?

RAP: That’s easy - she’s incredible. She’s easily one of the most talented authors I’ve read in the last few years. She has a handle on character that blows me away, and her ability to work strong emotion into tough stories and situations is a talent I can’t define. I’m so excited to be working with her. Her collection is going to blow people away.

SR: For you, what are the ideal ingredients in a great adult fiction story?

RAP: Deep, compelling characters who experience real emotions and real consequences. I’ll invest in any kind of story if you can make me give a shit about the people involved. That doesn’t mean “likable,” in fact, you’re going to impress me a hell of a lot more if you get me invested in a character who’s awful. Alissa Nutting did that in Tampa, which has stuck with me for years. Her protagonist is pure evil, a disgusting predator, but I kept turning the pages.

SR: And the ideal ingredients in a children's book or YA?

RAP: The most important element for children’s and YA is to respect your audience. You might be writing for a five year old, but five year olds have experiences, inner lives, opinions, and imaginations that are almost certainly wilder than yours.

With YA that’s even more important. Teens are going through all kinds of shit. The books that stick with a teenager are going to be the ones that acknowledge that. A lot of people think that because you eventually grow a little older and wiser, that you have the right to look down on or condescend to teenagers. But your mortgage payment or stress at work isn’t actually bigger or more important. High school kids are dealing with drugs, sex, sexual assault, unplanned pregnancy, whatever is going on in their home lives, all while being treated like children and being asked to make adult decisions about life after graduation that will affect them for the rest of their lives. Your book doesn’t have to tackle all of that, but a YA book that fails to acknowledge the adult in young adult is always going to fail.

SR: Do you have any pet peeves or taboos writers should avoid when submitting to you?

RAP: If you’re writing a character outside your experience, please do some research. I get exhausted quickly when I see an identity used as shorthand. Saying someone is a Marine, for example, doesn’t explain why they kill people now. Writing that a character is disabled doesn’t explain a cynical world view. If you don’t know for certain how a mental illness affects people - look it up. Do the research. We need more stories from minority perspectives, but they need to ring true.

SR: What's the most rewarding part of your role?

RAP: I’ve been a reader and a writer my entire life. I can’t describe how exciting it is to be one of the first people to read something really amazing, and play a role in getting it out into readers’ hands.

SR: What do you find hardest?

RAP: Saying no. I know the amount of work, emotion, and stress that goes into writing something, polishing it, and sending it out into the world. I’ve gotten better at rejecting work over the years but it’s never easy.

SR: What advice do you have for writers planning to submit to Bronzeville?

RAP: Be bold. Find your truth and tell it.

Thanks for hosting me, Kevin. Bronzeville Books has a lot of exciting plans for the future, starting with our open call for manuscript submissions and for stories for Illicit. Find out more here: http://www.bronzevillebooks.com/writers/

Glad to have you here!