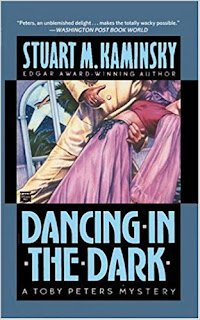 I read a few of the Lew Fonesca books some time ago, and the Toby Peters series has been on my TBR list for a while. So, when I found a copy of Dancing in the Dark (Mysterious Press, 1996) in one of my interminable book clean-outs, I took it as a sign. In this, #19 of Toby’s adventures, Fred Astaire has attracted the interest of a determined girlfriend of a Detroit mobster. She wants Astaire to teach her to dance and to undertake other activities with her, much to his dismay.  While the mobster changed his name when he relocated to Los Angeles, he did not otherwise change his thuggish ways, and Astaire has valid concerns about his future health and well-being.

Astaire is focusing on his wartime bond-raising tour and signs Toby up to teach the girlfriend in his place. Toby unfortunately has two left feet, as the saying goes, and makes a poor substitute.  When the girlfriend turns up dead in a ballroom where Toby and his friends are the logical suspects, Toby scrambles to protect himself, his friends, and Fred Astaire from the mobster’s wrath.

Excellent investigative work wrapped in effortless Golden Age Hollywood period detail. The scene where Toby borrows Cornel Wilde’s dinner jacket for an impromptu turn across the stage of Wiltern Theatre in front of a huge audience is side-splitting. An entertaining read.