Review: Outside the Wire: A Pacific Homicide Novel by Patricia Smiley 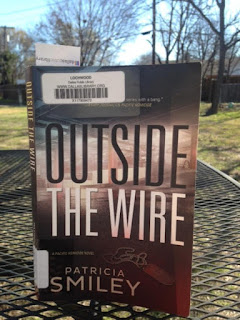 Pacific Homicide Detective Davie Richards is battling PTSD and for good reason. That is not nearly all as she also has a new case in Outside the Wire: A Pacific Homicide Novel. It is early one very warm morning when she and her partner, Detective Jason Vaughn, are called out to the second floor of a parking garage at LAX.

Members of airport police have already contaminated their crime scene of a car and the surrounding area. A dead man is lying next to the trunk of an Audi A6. The deceased appears to be in his early sixties and is very physically fit. No reason for the man to be dead other than the obvious bullet hole in the right side of his skull and the accompanying pool of blood. Based on that fact that a smaller hole is at the back of his head, she believes he was shot from the front at close range.

He is also wearing a single dog tag that is wrapped loosely in black electrical tape. There should have a second tag with the first with both wrapped in tape to mask the sounds they would make bumping against each other as the wearer moved. Somebody took one dog tag and that might be the killer. Thanks to information provided by one of the airport police officers who knows what the left behind dog tag means, she learns that the deceased person served in the army and that most likely he served in Vietnam. According to the remaining tag he is Zeke C. Woodrow. 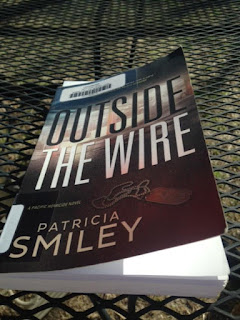 In all likelihood, he was forced into retirement some time ago when he turned sixty. Why he was wearing his old tags now, why he was in the parking garage early that morning, and who killed him are just three of the many questions Detective Richard and her partner Detective Jason Vaught have to answer to solve the case.

A first case of several because the killer is not done. Not by a long shot. The killer has an agenda and a target list and Richard and Vaughn have a real mess on their hands.

Building off events in Pacific Homicide, this second novel by Patricia Smiley is an intense page turning read from start to finish. Some story arcs from the first book continue here in Outside the Wire: A Pacific Homicide Novel and serve as background to the rapidly increasing chaos of the new cases. Like the first book, this one as well is part mystery and part police procedural with plenty of the personal sprinkled throughout the read. The result is a good book in a good series and another read well worth your time.