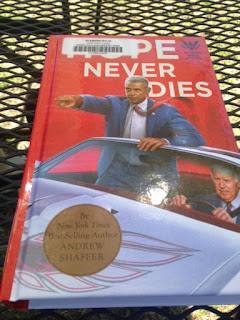 Former Vice-President Joe Biden is having a tough time in his friendship with President Obama. The change in administration in Washington has seen much of what was accomplished undone. It has also meant that Biden has not heard from Obama since while Obama has been busy living the high life doing one fun thing after another all around the world. It seems like Obama is not so privately auditioning just about everyone for the role of his new best friend. Biden is more than a bit bitter and jealous as Hope Never Dies: An Obama Biden Mystery begins.

It is with those dark thoughts in mind that Biden happens to notice a small orange light outside his home office window. He goes outside to investigate and finds at least one agent of the Secret Service in the woods just outside his home in Delaware. Since former VP Joe Biden has not had Secret Service protection in months that agent is not for him. The presence of that agent as well as the distinctive odor of a certain kind of cigarette can only mean one thing- President Obama.

It is the man himself, but his sudden visit isn’t about the status of their friendship. President Obama brings the news of the death of Finn Donnelly, and wanted Biden to hear it from him directly and not see it on the news first. A conductor for Amtrak, Biden and Donnelly were friends when Biden was riding the trains to and from his home to the Senate in Washington. Once Biden was Vice President, riding the rails was too problematic due to the Secret Service rules and security issues, so Biden quit riding the rails and the two men lost touch. Biden had meant to get in touch in recent months and one thing and then another happened and he didn’t. Now Donnelly is dead and Wilmington PD thinks that the fact he was killed while sprawled out on the tracks was just an accident. They also think the man might have been stalking Biden since he had a map to Biden’s home in his pockets.

With Biden not under Secret Service Protection, they won’t investigate and claim it is an FBI problem. Of course, the FBI refuses to investigate and argues that the issue is one for the Secret Service. President Obama found out what was going on and thought Biden should know. Hence, the meeting in the woods between the two men who have not spoken since their White House days.

Biden doesn’t believe for a second that Donnelly meant him any harm. Why he had the map and what he was up to are just two of many questions Biden has. Biden may be out of politics, but he still has his old contacts in and outside of law enforcement. As a private citizen who does not believe the man was any kind of threat or a drug user of any type, he knows something is going on and isn’t of a mind to just let it go.

First in new series, Hope Never Dies: An Obama Biden Mystery is a fun read as long as one accepts the premise that Biden and Obama could go around doing things without being noticed and/or attracting crowds of people. While it is a mystery, this is not a read that takes itself too seriously and neither should the reader. Some of the escapades Obama and Biden get into on the course of finding out what happened and why are bit out there, but so too is the basic premise. The result is an enjoyable read with occasional humor and political insight.


The next book in the series, Hope Rides Again, is scheduled to be released on July 9, 2019.

For another take on the book, go over to the Bookblog of the Bristol Library and read Kristin’s review from last October.