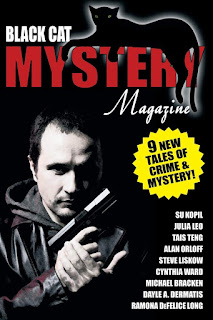 After a short introduction to the issue, Black Cat Mystery Magazine: Issue 4 opens with “Something Fishy” by Michael Bracken. If you have read Mr. Bracken’s fiction before you know he always weaves an interesting story where everything is not as it seems. Such is the case here where readers are taken to the mermaid show at Weeki Wachee in Florida and more. Erin is one of the mermaids and she has a friend with a major problem. She also has a cellphone left by a patron. She also has a plan that becomes increasingly dangerous and detrimental to her health and the health of others.

Alan Orloff is up next with “In Separable, In Sufferable.”  Ripping off the drug dealer was easy compared to dealing with that annoying voice in his head. That voice has plans for better days for Earl and expects him to comply.

“Use Of The Awkward Hand” by Julie Leo features handwriting analysis, a polygraph machine, and a possible classic femme-fatale. The woman in question, Mrs. Nicole Hightower, is a widower, a fiction author, and a murder suspect.

The short poem “The Timeline Murders” by the late Janet Fox is next. The short poem details the current/past/future case being worked by Inspector Quick.

Dayle A. Dermatis and “Umberto Scolari And The Feast Of Paradise.” Umberto Scolari is having a hard time. The Duke’s astrologer has declared that tomorrow should be the wedding feast. If he can’t fix the rotating stage the Duke of Milan will not be happy. Nor will his boss, Leonardo. Then someone uses poison and the stage is a secondary issue for Scolari. How the person died is an easy question to answer. Who did it and why are questions that are a part of tale of intrigue among the nobles.

“Moe’s Seafood House” by Ramona Defelice Long opens at the named establishment. Saturday night and the place is packed. Ken is not pleased and his companion, Amanda, is trying to keep him calm and excuse his boorish behavior. As the evening rolls on she has to make a lot of excuses for him. 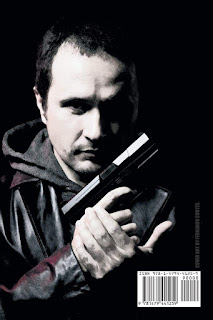 For Masie Finch and Emmaline, the anniversary each year when their parents died is tough. It happened years ago and yet the anniversary still haunts them both. As the years have passed it also become clear that Masie has to take care of Emmaline as the younger sister just can’t cope with life. The anniversary this year means they are at a Bed and Breakfast in Londonberry, Vermont. In “Mud Season” by Su Kopril, their fiftieth anniversary and trip is getting off to a strange start and not just because there is mud everywhere and the place is a little shabby.

Blackie Rose is dead on the stage as “Messin' Wih The Kid” by Steve Liskow begins.  Detective Tracy Hendrix and his partner, Timmy Bryne, have their hands full to figure out why he died. None of his band mates and assorted other folks can believe he is dead, though as the investigation proceeds they had all noticed he seemed a bit off in the hours leading up to his sudden death. Was it a drug overdose as possibly indicated by the white residue around his nostrils or was it something else that killed the star of the group known as fireworks?

Gregory was part of the family and now he is very much dead. He was found floating in the river next to the family houseboat. Clearly shot in the back, he was murdered. Like any family member, his death has to be avenged in “Assassin Scroll” by Tais Teng. Even if he was the idiot of the family and thus had to be left out of their thefts of antiquities and such. Stealing a scroll that dates back to the Crusades might have something to do with the escalating problem that will lead to a showdown in Amsterdam.

Baby sister Tay is in love again and there will be problems in “Trouble In Mind” by Cynthia Ward. There always is with Tay and her love life. Tanis will have plenty to do to try and fix this mess as winter reluctantly loosens its grip on Maine and their dairy farm. That last blast of winter serves as a backdrop for hot passion and problems that can’t be allowed to foster and grow.


Black Cat Mystery Magazine: Issue 4 is another solidly good issue. As has been clear before, the authors and stories in this issue are another wide ranging mix of styles and substance showing the fact that the mystery tent is a wide ranging one open to all. Unlike the various niche markets that all have their place, Black Cat Mystery Magazine embraces all and not all deaths are undeserved.

By using funds on my Amazon Associate account, I picked this up late last January in order to read and review.

As always, a most professional review. I enjoyed reading about each of the stories in this magazine.