Back in April 2012 I first told you about Warning Signs by Jan Christensen. For this final Friday of March 2019, I remind you why this short story collection is a good one. For the full list of other reading suggestions, head on over to Todd Mason’s Sweet Freedom blog. Sadly, that blog still has nothing at all about the sweet freedom of not wearing pants, but maybe someday. 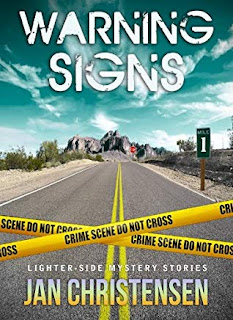 Warning Signs by award winning author Jan Christensen is made up of three short stories that were previously published in print and online markets. This collection is a bit less than 19, 000 words and each story is a good one. Each story has a small intro, a brief explanation of how the story came about, and details on where the piece first appeared.

The book opens with the longest story “Warning Signs.” Rhoda isn’t happy with her ex-husband Hank for a lot of reasons. For one thing, he isn’t paying his child support for their daughter Tiffany. To draw attention to the problem, Rhoda had a bright idea to put up a few wanted posters with Hank’s picture prominently displayed along a local highway. He owes fourteen thousand in back child support and with Tiffany in kindergarten and other issues, Rhoda is desperate.

The final story titled “Quack” involves a kidnapping.  Awhile back Josie defended a guy, Harley Summers, who shot up a local coffeehouse. Fortunately, he didn’t hit anyone but he still ended up serving jail time. He is now out supposedly none too happy about having had to serve jail time. That makes him the obvious suspect when Josie disappears and her aunt Reba is told that the ransom is 50K. The police can’t be involved and fortunately, Reba is not only also a lawyer, but a resourceful woman who has people she can trust.

Coming in a bit less than 1900 words this small short story collection is a fun and fast read full of mystery and double dealing with the occasional flash of humor. These three stories feature women who can handle their business and deal with whatever comes their way. Feisty and independent, the heroines don’t wait to be rescued but take action on their own to get the job done. Violence is kept at a minimum in these three stories as are the body counts and descriptions of the death scenes. Instead, the focus in Warning Signs is more on the psychology of people and their relationships and how folks may interact in ways that are not revealed until the aftermath of a murder.

Pants are overrated. Cummerbunds, on the other hand...

Thanks, Kevin. Made my day!

You wrote too soon...there is a post, an FFB post no less, on my blog from some years back about people who aren't too fond of trousers on balance, and not a few other posts dealing with those who've shed them however temporarily...