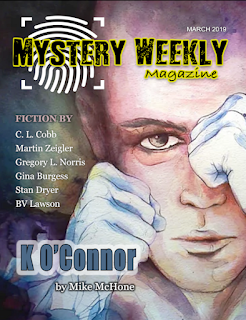 Mystery Weekly Magazine: March 2019 opens with “K. O’Connor” by Mike McHone. Detectives Molly Fetterly and Jim Biggins were still in route to the hospital when the man died. Hospital staff has no idea who he was or who dumped his broken body outside their building so that he would be found. Fortunately, Detective Biggins knows who the deceased was and that gives them the name they need to start investigating the case.

Etta has just announced that she poisoned the soup in “Let’s Talk Toxins” by Martin Zeigler. This presents an interesting problem for her husband, Otto, as he sees it. It is also a pleasant change of pace from the usual boring things she wants to talk about at bedtime. It has been years since she had a sense of humor or pulled a prank, but tonight she is just full of wit delivered with a teasing smile.

Getting rid of a family member is also a point in the next tale, “Finishing Off Gammie” by Stan Dryer. In this case, Gammie is the mother-in-law and she has to go. Harry Fredder has decided she has outlived her usefulness as she has turned increasingly bitter and lonely. He has plans for travel and more with his wife, Martha, and Gammie is becoming and increasing problem that threatens their long planned retirement. That can’t happen.

The knife used by an unknown assailant killed Allison Browning at the District of Columbia War Memorial. She had been in the middle of taking a selfie when she was stabbed and collapsed trapping the cell phone beneath her. As people started converging the killer had no choice but to flee and could not hang around to look for the phone. In “A Flash Of Red” by BV Lawson, Scott Drayco is on the case thanks to her wealthy grandfather who desperately wants to know who killed her and why.

Long ago Vivee Driscoll starred in the classic movie, Girl on a Bike. These days she lives in Room 209 in the Whittier Hill Retirement Community. She is almost one hundred years old and the star of “Antiques” by Gregory L. Norris. An unwilling star as well as things are escalating in a dangerous way.

It is annoying when somebody parks in your parking space.  William is annoyed when he pulls into the lot at Fuller Engraving having come from burying his father to find a car in the spot. Things are going to get way worse. “In The Truth Of The Matter” by Gina Burgess secrets have a way of coming out for all to see.

Mowing the neighbor’s yard led to one thing and then another in “A Case Of Southern Discomfort” by C. L. Cobb. While there is some carnal southern hospitality, there are some serious issues as well. There is also a clear need for a gun as it is the South after all.

Heather enjoyed her walk in “A Flap Over A Ring” by Jenna Weart. In the “A-You-Solve-It” mystery, her ring is now missing and she needs your help to identify the thief among her fellow vacationers at the Daisy View Lodge.

The answer to the February 2019 “A-You-Solve-It” mystery titled ‘Stair Case” by Laird Long closes out the issue.

As has been the case in previous issues, Mystery Weekly Magazine: March 2019 features a nice mix of stories and styles. None of the tales is over the top in terms of language or graphic scenes and none of them are noir in style or tone. All are solidly good mysteries that don’t push the boundaries or sensibilities of any reader, but do provide plenty of reading entertainment.