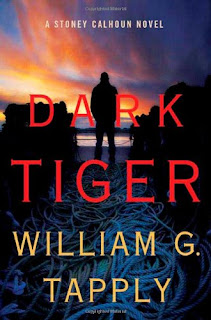 Before Victoria Houston wrote about fly-fishing in fictional Loon Lake, Wisconsin, and Keith McCafferty gave us Sean Stranahan, a fly fisherman and private investigator in Montana, Philip Craig created J.W. Jackson, a retired policeman eking out a living via fishing and odd jobs on Martha’s Vineyard, and William Tapply invented Brady Coyne, a lawyer in Boston who practiced just enough law to pay for his fishing trips. Tapply was also a committed fisherman in his real life, publishing some 15 books about the sport and serving as a contributing editor for Field and Stream and a special correspondent for American Angler.

Tapply let his love of fishing spill over into his mystery writing even further when he began a new series featuring Stoney Calhoun, a fisherman and part-owner of a fishing supply store in upstate Maine. Stoney’s past is foggy; his memories do not go back further than waking up in a VA hospital and being told he had been struck by lightning. He moved north to start all over again in the fishing country of Maine. Every so often an unidentified man shows up, clearly from Stoney’s forgotten past, to see if Stoney has remembered anything. He doesn’t say why he wants to know, and Stoney doesn’t like it at all. However, the man has the power to make Stoney’s life uncomfortable and he demonstrates that power now and again, such as in Dark Tiger (Minotaur, 2009), when the mystery man arranges to sell the bait-and-tackle shop out from under Stoney and his partner if Stoney does not agree to investigate the very odd death of an intelligence agent.

The agent had been staying at an exclusive fishing resort on the northern edge of Maine, close to the Canadian border, so Stoney becomes a temporary fishing guide there. Within 24 hours one of the guides is shot to death and another one is arrested for the killing. Stoney feels certain the second death is connected to the dead agent and looks for ways to investigate both without blowing his cover while he fishes and admires the scenic lakes in the area.

Tapply’s books are a pleasure to read. His prose is crisp and clear, his plots are convincing, the pacing never drags. The Stoney Calhoun series will be of interest to C.J. Box and Nevada Barr fans as well as those readers who follow Victoria Houston and Keith McCafferty or anyone who wants mysteries mixed with nature.