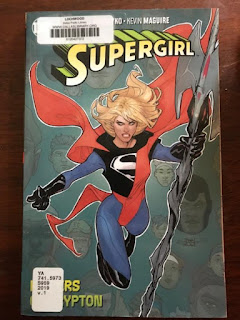 Supergirl Volume 1: Killers of Krypton by Marc Andreyko and Dan Jurgens with art by Kevin Maguire and numerous others, is a spinoff from the events depicted in Man of Steel by Brian Michael Bendis. This new series has Supergirl leaving Earth to investigate Rogal Zar’s claims that he destroyed Krypton as part of an intergalactic conspiracy. Superman does not want her to go, but knows he can’t stop her so he sends along Krypto (Kryptonian dog) to help. Her first stop is to see members of the Green Lanterns. Her main clue to start off is she has Rogal Zar’s axe with a mysterious circle on it. That symbol is the calling card for the conspiracy and means that the evil organization behind the conspiracy is kind of stupid since they left the symbol of their conspiracy on a weapon that could be taken by an enemy.

This volume has lots of guest stars such as Superman, Hal Jordon, Ch’p (a Green Lantern alien that looks like a squirrel), and more. This is a fun book despite the fact at times that the deal is a little stupid. The clues are not the best and one major twist should not be surprising for longtime readers. It always happens.

The last story in the volume is a random Christmas story that is included as part of this volume despite having nothing to do with the rest of the book. The Christmas tale is a good story, but it feels out of place in this volume. While the rest of volume is a mystery in outer space with Supergirl away from her adoptive family, the last story is a disconnected Christmas tale where she is suddenly back on earth and is celebrating the holiday.

In this read, Supergirl is angry as she deals with the pain of her loss, but retains her sense of humor. She remains very smart and frequently out thinks her enemies. Something that a lot of writers for this character choose to ignore, but her brain power is something that is very clear in the book. 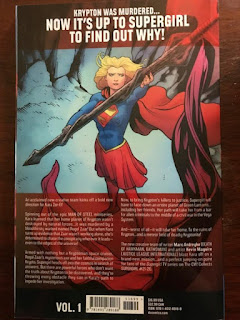 Krypto is awesome and a perfect mix of badass while being adorable. The villains are pretty forgettable since we don’t know much about them yet. The art is good for the most part, but occasionally the various faces seem to be a bit off. It is not hideous when it happens, but it can be distracting for the reader.

Overall, Supergirl Volume 1: Killers of Krypton by Marc Andreyko and Dan Jurgens with art by Kevin Maguire and numerous others, is a fun story involving Supergirl. This is good place to start for new readers.

My copy came from my home branch, Lochwood Library, part of the Dallas Public Library System.