Aubrey Hamilton Reviews: This Is What Happened by Mick Herron 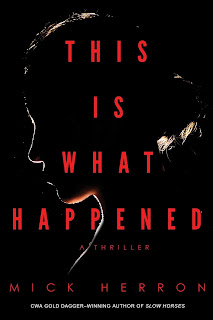 Mick Herron is a talented author of crime fiction that is routinely shortlisted for major awards. His books about a group of failed MI-5 agents are utterly brilliant in concept and execution. This Is What Happened (Soho Crime, 2018) is a stand-alone spy novel with several surprises along the way.
Maggie Barnes is 26 years old, living alone in London in a sublet room and working a mediocre job in a large corporate mail room. Both parents are gone, her only sibling is a sister to whom she hasn’t spoken for years. Few friends and not many interests, she could disappear and no one would notice. She often treats herself at a coffee shop on the way home from work, where she’s approached one day by a stranger who engages her in conversation. Too lonely to question this man’s attention and motives, she comes to rely on meeting him. Eventually this stranger explains he’s from MI-5 and that the company she works for is under surveillance for its foreign connections. He needs someone to install a program on their computer network so MI-5 can monitor the company’s activities.
Naïve Maggie does not question anything this complete stranger tells her. He coaches her for weeks on how to install the program, which computer to use, how to escape detection by the security guards, etc. On the night she is to install the system, she hides in a ladies’ room until midnight, when she sneaks up several flights of stairs to the executive offices and successfully inserts the flash drive she’s been given in a senior manager’s computer and turns the computer on. En route downstairs, however, she runs into one of the security guards who knows she shouldn’t be in the building at that hour.
From that point on, the story takes so many twists and turns, the reader might reasonably feel the onset of whiplash. Unexpectedly dark, loaded with suspense, it’s easy to quickly become invested in Maggie and her well-being, which is seriously in doubt at several points in the story.
Publishers Weekly and Booklist starred reviews.