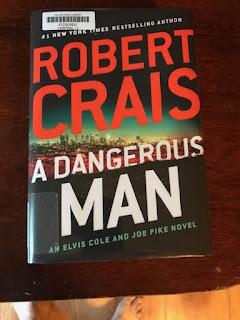 Isabel “Izzy” Roland knows nothing and is oblivious to the fact she is being stalked. She is a bank teller, still grieving over the loss of her mother, and living in the house she inherited. Just another person going about her unremarkable life each and every day, until two men abduct her while she is on her lunch break. Fortunately for her, Joe Pike is around and comes to her rescue.

Having foiled the kidnapping, rescuing Izzy, and making sure that the two kidnappers are alive and in no condition to leave the scene, it should have been all over with the arrival of the police. It isn’t and not just because Joe Pike has a well-deserved reputation. Soon after the two abductors post bail, they are murdered in looks to be a flat out execution. Izzy vanishes and Joe Pike goes on the hunt to find her while at the same time Elvis Cole starts working the case. Why people are going after Izzy is the starting point of a very large and complicated situation that generates an increasing body count and no easy answers.

As has happened with the last several novels, A Dangerous Man: A Joe Pike and Elvis Cole Novel is the currently fashionable and typical thriller style read of short chapters, little to no character development or depth, and constant action as everyone races to and fro in a fresh panic over some event or situation. This read has no relation to the books of depth found early on in the series. Instead, with its constantly shifting point of view, numerous action scenes, and shallowness in descriptions and details regarding characters and most settings, is designed to be a movie first and a book second. While A Dangerous Man: An Joe Pike and Elvis Cole Novel is a fun and fairly entertaining read for a brief time, one does miss the meaty books of earlier in the series. No doubt in this day and age, it will be NYT Bestseller and sell like crazy for months to come.

My copy came from the Central Branch (Downtown) of the Dallas Public Library System.