Michael Bracken’s short story, “Itsy Bitsy Spider” starts off the fifteen 15 tales that make up Tough 2: Crime Tales. Mona Peterson was trouble from the moment she walked into Morris Ronald Boyette’s office. She had walked over from the University in the rain, sans umbrella and bra, and wants to have the detective to deal with the Professor’s sexual harassment. That case is one of several that take up his time in “Itsy Bitsy Spider” and is easily the most consequential to the good detective’s future.

Frank is a long way and many years in Chosin, Korea in “The Third Jump of Frankie Buffalo” by Thomas Pluck. A choke point is anywhere where things get really narrow and something can happen and the railroad crossing ahead of him is definitely a chokepoint. The cement mixer Frank is driving has a job to do and the stalled traffic is nothing more than an inconvenience. That is until, as the clock ticks and his mission takes a turn, it isn’t.

The time is also a major part of “Day Planner” by Matt Mattilla. In a story where events are marked by the hour and minute, the kid goes through his day trying to blend in and not draw attention to himself for good reason. Easier said than done. Especially when others cause issues.

Driving a car for Valley Cab is usually fairly easy for Gordon Jurewicz. He has his routine and an uneventful life. Then she jumped into his backseat and started screaming for him to drive in “Tally Ho” by William R. Soldan. She needs help and Gordon is eager to do so.

Anne and James talk a walk every morning on the beach of Amelia Island, Florida. It has been their routine for two years now. In “Beach Body” by C. A. Rowland, their walk is interrupted by the discovery of a body. James knew the now dead woman and probably knew her intimately. Anne knows that another scandal, just like what happened in Chicago, is soon in store and her marriage might not survive this one.

Marty had no idea how much he was in trouble with Shayne until after they ate at the diner just south of Charlotte. This time isn’t like the many other runs to West Palm Beach and back. In “Long Drive Home” by Andrew Welsh-Huggins, Marty has to figure out a way to deal with the new situation. Things are going to get very complicated very fast 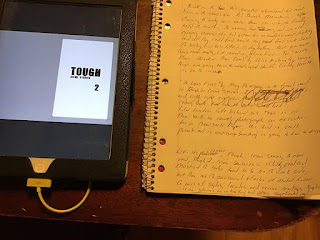 It is a beautiful afternoon and Cowan wishes he was sitting in a seat on the plane cutting through the cobalt blue sky far above him in “Masonry” by Rob McClure Smith. He isn’t. He is also being followed. The kid who is following him is just the vanguard of a bigger problem known by the name of Prince Hall. Outnumbered and outgunned, running his mouth could be his only option. Until it isn’t.

Carla has plans and needs Arron to spring for what she wants. She knows how to work her feminine magic in “Once Upon A Time in Chicago” by Tia J’anae. But, this night is off and she felt that way from the start. She really should have listened to her inner voice that was shouting a warning.

Turner didn’t want to go behind bars, but it is what it is in “The Grass Beneath My Feet” by S. A. Cosby. Cold Water Correctional Facility is what it is. At least they let him out for a brief visit to a chapel to pray his respects to this deceased mother. It has been a long 15 years and plenty is on his mind.

Marsha knows everybody says a dead body looks like a mannequin, but it really does in “No News is Good News” by Evelyn Deshane. Even though it always seemed silly to her and she knew it was a cliché, Marsha now realizes it is definitely true. She had seen the van pull away from the nearby bus stop so maybe she has a lead for the police.  A lead that the police don’t seem to care about at all because some victims just don’t matter.

Bagging groceries isn’t that great a job, but it is a job. In Haggard, the options job wise are very few. In “The Bag Girl” by Alec Cizak, she does what she needs to do to survive. She has a job at the store and another at home and both are mind numbing and hard in their own ways.

From direct personal experience, Jean knew what the man who called himself “Samson” did two years ago. The fact that he stole the table was just a symbol of everything he stole that night. That night changed the course of her life forever. In “Sarah, Sweet and Stealthy” by Preston Lang, a form of justice comes slowly and with some help.

Back in the 40’s, a mother abandoned her newborn in in the woods of Red Thrush Mountain. When a search party went looking after the young mother confessed, all they found was a small feed sack dress covered in feline fur. It may be years later, but the legend of what happened is still strong and a menacing presence. In “With Hair Black Than Coal” by Chris McGinley, strange things are again going on in the woods and Sheriff Curley Knott is on the case.

“She Loves First” by Mary Thorson is the final read in Tough 2: Crime Stories. Lula has been left behind as Tom is in New York to covertly photograph an execution for a New York Paper. His bird is still present and is seriously annoying. Something is going to have to change as she can’t keep living like this.

Like its predecessor, Tough: Crime Stories, the new book, Tough 2: Crime Stories, is a solidly good read. Most of the tales are on the dark side, but there are the occasional flashes of muted humor. Even if that humor tends to be on the dark and twisted side of the ledger. As one would expect from the title, these are not tales of cozy mystery where a death is gently and politely discussed by the flickering light of the fireplace while one sips tea. These are often tales where the gut churns with physical fear and one can smell the scent of murder on the night wind. While not present in every single story, these characters are often desperately clinging to life in situations where the price each day for existing to another sunrise is to kill before being killed. A mix of styles, locations, and crimes makes Tough 2: Crime Stories an enjoyable and often complicated read.

ARC PDF supplied by Editor Rusty Barnes with no expectation of a review.