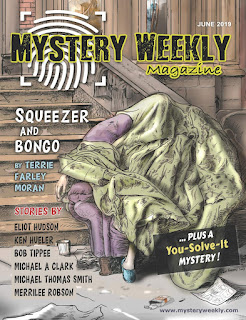 Mystery Weekly Magazine: June 2019 opens with the cover story of “Squeezer and Bongo” by Terrie Farley Moran. Mr. Bongorelli, a corporate attorney, is less than thrilled when Squeezer Markhum shows up at his office.  They both are a long ways from High School and for Bongo a lot of those memories are not necessarily positive. While Bongorelli, aka “Bongo” does corporate law these days, Squeezer works as a garbage man. Squeezer wants and insists on Bongo’s help as he is in real trouble with the cops. That very morning Squeezer and his partner, Mikey, found the body of Squeezer’s ex-wife, Lisa Gasper, placed in a chair outside a derelict Victorian on their pickup route. With the chair as well as the body covered by a sheet they had no idea what they had until they had stopped and pulled the sheet off the chair. Obviously, Squeezer is the obvious suspect. The last thing Bongo wants to do is help Squeezer. Yet, he keeps getting pulled in deeper and deeper as things become increasingly complicated in this very good tale.

Evan showed up at Randy’s place in “The Calm” by Ken Hueler and nobody was home. He drove away and tried to stay awake as he pondered where to go next. That was before he saw her on the other side of the road. She is a hitchhiker, dressed for the heat of summer, and all alone on the rapidly darkening and otherwise empty highway. He does the gentlemanly thing and offers her a ride. That may turn out to be yet another serious mistake he has made in his life.

“Interdiction” by Michael A. Clark follows where Justine is creating a trail so that no one goes after her husband. Her diversion tactic is designed so that her husband can make his escape with their money. They will rendezvous somewhere a half a world away. All the watcher is supposed to do is watch and report. Things are going smoothly until they are not and it is a good thing the watcher has a support team.

Pleasant Lane is a street of many houses in the typical suburban neighborhood where things are so tranquil people can leave their front doors unlocked and live life in a sort of Norman Rockwall fantasy life deal. Gladys Farrow is the neighborhood snoop in “The Other Woman” by Michael Thomas Smith. She knows damn near everything about everyone on her street and her friend Betty does not approve. Undeterred by the criticism, Gladys wants to know more about what has been going on at the Peterson house as there has been a strange red car that keeps showing up there around dusk for an hour or so before leaving. The gorgeous woman driving the car is certainly not Mrs. Peterson. The game is a foot and Gladys is determined to learn the identity of the mystery woman and more. 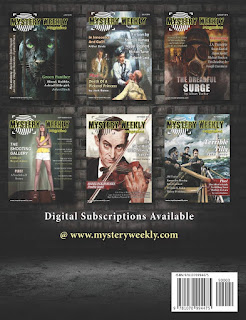 It began in Russia in 1979 and has tentacles that reach into today in “Russian Dolls” by Eliot Hudson. Anatoly Moskvin was nine then and all alone in the playground when the men came and made him go to a cemetery with them. What happened that day has become his life’s work and obsession. You can’t judge until you know all the fact of this dark and twisted tale.

“Buick” by Bob Tippee features a car that has been well taken care off by Seth Townes before being passed on to this son, Ralph. At first, seventeen year old Ralph is not exactly thrilled with the Buick LaCrosse. As he thinks about it more, he realizes the potential of the spacious backseat. A backseat that makes Sienna very comfortable and willing when the mood strikes them. It does frequently and on one such occasion makes them the target for auto theft.

The plan had been to try to get the mayor’s support for the Waterview Housing Co-Op. He would come out and take a tour and shake a few hands. If things went right, he would publicly support the building as part of a push for affordable housing. Now the mayor, Fred Drover, is dead in “A Locked Co-Op Mystery” by Merrilee Robson and all heck is going to break loose.

The issue closes with the solution to the “You-Solve It” in the May 2019 issue titled “For the love of wine” by Tatiana Claudy.

Mystery Weekly Magazine: June 2019 is another solidly good issue. Mystery, as it has been since the start, is defined widely in this publication. Mystery Weekly Magazine is not a niche magazine catering to only a small part of the mystery community. This issue, as do the previous issues, features a mix of storytelling styles, crimes, and well developed characters in tales that are sure to appeal to just about any reader.

Thanks Kevin, you really nailed this issue! and I am glad you enjoyed meeting Squeezer and Bongo.

It was my favorite of the issue. For what that is worth.

I hat to say it, but this is the first time I saw anything about Mystery Weekly Magazine (unless I did and just forgot). It looks interesting. I'm going to check it out. Thanks for the tip.

I have been reviewing them for quite awhile now. Just way behind in my reading.

It is a quality magazine with a wide focus mystery wise.

A fine review of an interesting publication! I enjoyed reading it.