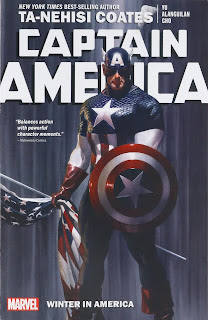 Captain America: Winter In America Volume 1 by author Ta-Nehisi Coates with art by Leinil Francis Yu is very typical of the work by Mr. Coates as it is a very political story. In this story, the real Captain America has returned after being replaced by an evil doppelganger that used his face and the people’s trust to overthrow the American Government and betray the superhero community. While the real Captain America was successful in his quest to overthrow and remove his evil doppelganger from Hydra and regain the trust of the superhero community, the people and the American Government no longer trust him. The country has fundamentally changed thanks to the Hydra takeover and the real Captain America no longer recognizes his country thanks to the changes that have come to pass. As is Bucky, Black Panther, and Sharon Carter, Captain America is also trying to find his place in the new America.

He is facing new enemies from his past that have ties to his old lesser known enemies suck as Taskmaster and others. Someone had managed to turn prisoners of war into Nukes (America Super Soldiers that use a template of failed attempt--the original Nuke-- to replicate Captain America) and is using them to attack the American people. Captain America may not recognize himself anymore or his country or the people, but he remains true to his driving core principal. If there are bad men hurting people, Captain America is going to take them on no matter what anyone else, including his own government says or wants him to do. 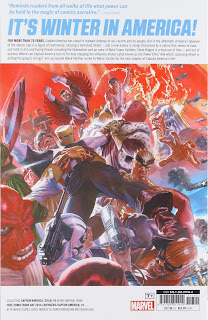 The art in Captain America: Winter In America Volume 1 is great and the story itself is very interesting. There are some twists toward the end of the issue that makes the reader very interested to see where this story is headed. The story plays heavily into Captain America’s past while still being new reader friendly. Captain America has to use his brains, his leadership skills, and get help from his friends help to win the day though it does seem possible that his action may be exactly what his enemies want to finally destroy him and everything he holds dear.

If you would like a good place to start reading Captain America stuff, Captain America: Winter In America Volume 1, is a good place as long as you do not mind very political stories. I highly recommend this volume highly. Readers are cautioned that this is tale has very strong political elements and tone and therefore may offend some readers.

My copy came from the Arcadia Park Branch of the Dallas Public Library System.