Aubrey Hamilton Reviews: Up in Smoke by Charlene Weir 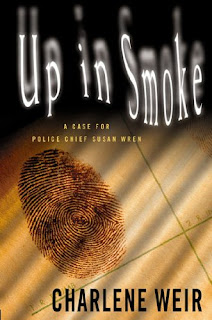 Up in Smoke by Charlene Weir (St. Martins Minotaur, 2003) is the sixth case of Susan Wren, police chief of Hampstead, Kansas, a small town that’s a far cry from her native San Francisco. The governor of Kansas, Jack Garrett, who is seeking the nomination for president, comes to Hampstead, his home town, to make his case to the residents. With him comes a host of ambitious staff members and a crowd of journalists accompanied by their camera crews. Garrett’s presence stirs up old memories, some good and some not. Susan’s already overcommitted staff is stretched to the breaking point, trying to provide security for the governor on top of the usual patrols and investigations. Then when a homicide occurs, everyone on the police force goes on extended overtime.
Two more story threads entwine with the police investigation. Casilda Storm, the governor’s college girlfriend, has returned to Hampstead after the sudden death of her husband and daughter. She is wrestling with severe depression when Garrett decides to add her to his political analysis staff, to the annoyance of his wife. Mary Shoals arrives in Hampstead because the governor is there. She is following him, seeking an opportunity to shoot him for defending her daughter’s killer years before when the governor was still practicing law.
The current activities leading up to the 2020 elections in the U.S. coincide perfectly with those in the book, giving this story an extra reading edge. Garrett is covering his home state, seeking votes in the upcoming primaries, just as the field of Democratic candidates is doing now in 2019. The behind-the-scenes details and the in-fighting and the jockeying for position among Garrett’s staff are so on target that Weir must have been involved with a political campaign at some point.
Setting aside the political overtones, which isn’t easy, the plot is complicated and the characters, even the minor ones, are compellingly portrayed. I found Casilda Storm an especially sympathetic individual. The stories of Susan, Casilda, and Mary alternate throughout the book and finally come together in the last few pages. I am going to look for the other books in this series, which received positive reviews from Publishers Weekly and Booklist.