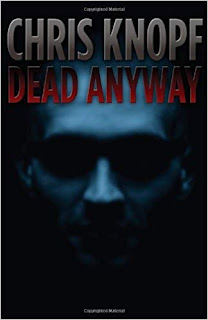 Dead Anyway by Chris Knopf (The Permanent Press, 2012) is the first book about Arthur Cathcart, a mathematics whiz who earns his living conducting mostly market research but nearly any kind of research his clients might want. His wife Florencia owns a successful insurance company. They are happily married and well off. All is right in Arthur’s world, until the day a man shows up in their living room, holding a gun on Florencia until she completes the answers to five questions written on a piece of paper. When she takes too long, he shoots Arthur in the leg and then threatens to shoot him again. After Florencia scribbles the answers down, the goon shoots her in the head and then shoots Arthur.
While Florencia died instantly, the bullet took a more indirect path through Arthur’s skull and he survives after months-long coma. He convinces his doctor sister to write a death certificate for him, since his ability to identify the murderer places him in continued jeopardy. Then he cashes out his retirement funds with his sister’s help and buys a collection of vintage guitars that he plans to sell one at a time as a source of nontraceable cash. Arthur is going off the grid to find his wife’s killer.
Arthur displays an impressive talent in hacking computer systems and more knowledge than I would have expected from a research nerd in dealing with underworld thugs, all while coming to terms with his own changed physical abilities.
Reviewers loved this book. It received starred reviews from the big four: Publishers Weekly, Kirkus, Booklist, and Library Journal. It was one of Publishers Weekly Top Twelve Mystery/Thrillers of 2012 and on the list of Kirkus Best Fiction of 2012. It also received the 2013 Nero Award. I can see why: it is an original and entertaining story. Highly recommended.