Aubrey Hamilton Reviews: Death of an Englishman by Magdalen Nabb 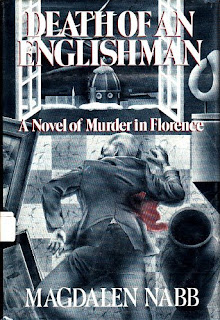 I have been doing some armchair traveling the past week or two, which included a trip to Florence, Italy. Magdalen Nabb (1947-2007) was born in Lancashire and moved to Florence when she was 28 years old, even though she did not speak Italian. She produced a number of children’s books and wrote 14 mysteries, published between 1981 and 2008, about Salvatore Guarnaccia, a Sicilian marshal in the Italian Carabinieri stationed in Florence.
Death of an Englishman (Scribner, 1982) is an initially inauspicious introduction to Guarnaccia, who is suffering from a severe bout of influenza. In his moments of consciousness, he worries about reaching his family in Sicily for the Christmas holidays, which are imminent. Carabiniere Bacci, a very correct police trainee covering the office while Guarnaccia is ill, responds to the report of the death of a reclusive Englishman. The death is plainly a homicide so Bacci reports it to Guarnaccia’s supervisor, who in turn reports it to the British embassy. Two members of Scotland Yard’s staff arrive to assist the Italian police with the investigation. The fact that the senior Italian officer does not speak English and the senior English inspector does not speak Italian makes communication complicated.
Nothing much is known about the Englishman, who didn’t mix with the British expat community and didn’t make friends with the locals either. His clothes were worn, he lived in a run-down apartment building, and he skimped on food, so the safe in his bedroom with a large amount of currency from various European countries came as a surprise to the police. Also unexpected is the quantity of fingerprints found in the apartment, where the Englishman supposedly did not entertain visitors.
Guarnaccia recovers enough near the end of the book to make key contributions to the resolution of the story, using his knowledge of the neighborhood and its residents to piece together the puzzle that stymied his superior and the Scotland Yard representatives.
Nabb’s familiarity with Florence shines in the many descriptive passages. The book is worth reading for those alone, although the plot is polished and full of realistic characters. I particularly liked the eccentric lady who turned her apartment into a museum for English poets. This first title in the series was shortlisted for the CWA’s New Blood Dagger award.