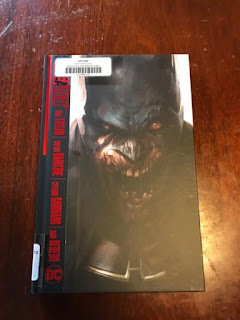 DCeased by Tom Taylor is a great Elseworlds tale that is not for the faint of heart. This Elseworld tale is about what happens when the DC heroes fail to save the day. It is a zombie apocalypse with 600 million people infected already. The virus infects people through techno-organic means. Anyone who is looking at a screen of any kind connected to wifi is immediately infected by the virus. This means that everyone, including multiple heroes and villains, infected in the blink of an eye with no warning at all. There apparently was not a patient zero as millions were infected simultaneously.

It is too late to save the day. All that remains is to save what is left and try to survive.  This book collects the first six issues of the miniseries along with one tie in. This universe is pretty much the e same as the current DC rebirth universe except the Super Sons (Batman and Superman) are in their late teens for story reasons). The main characters are Superman, Wonder Woman, Lois Lane, Harley Quinn and others long familiar to readers.

The characterization of the characters is incredibly good and the story is filled with violence, humor, and more. This is a dark read with horror overtones as multiple fan favorite characters are infected and killed throughout the series. Many big name characters fall to the virus early at the beginning of the series and even more fall to the virus as things continue to escalate. The artwork is great and at times pretty terrifying.  A cool part of the series is showing what happens when heroes unleash their full strength on the infected. The ending leaves the miniseries in a good place to start a direct sequel series. 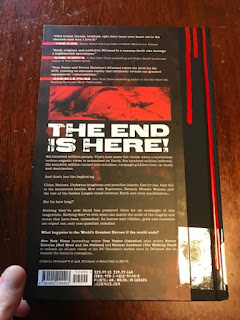 The tie in issue focuses on Mister Terrific. He is the third smartest person in the world and is trying and failing to find a way to stop the virus. He is assisted by various D-list heroes that he hopes have not fallen to the virus.

Summer 2020 there will be another miniseries set during this apocalypse from the viewpoint of the bad guys. This series, from their perspective, will feature the anti-heroes and villains of the DC universe. The title of the new miniseries,  DCeased- Unkillables, sees a team led by the former Robin named Red Hood. He is the black sheep of the family and is better at being a killer than being a hero. He, like the rest of the antiheroes and villians, are better suited to deal with the world as it is in this time, than the heroes are as they are constrained by their moral codes and messy respect for the law.


My review copy came from the Skyline Branch of the Dallas Public Library System.