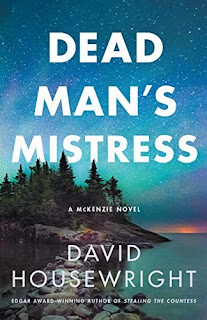 Rushmore McKenzie, created by David Housewright, is one of my favorite fictional characters. Pleasantly self-indulgent and not especially energetic, he is still willing to do favors for his friends, as well as for friends of friends, which is often how he gets into situations where his ribs are cracked and the police are asking him awkward questions.

In Dead Man’s Mistress (Minotaur, 2019), the 16th of Mac’s adventures, the director of a local museum whom he helped in the past asks Mac to help a friend locate some paintings that have been stolen. Mac of course can’t say no, especially when he learns that it’s not just any friend, it’s Louise Wyckoff, the reclusive yet famous subject of dozens of paintings by the world-famous artist Randolph McInnis.

The discovery of the paintings with Louise came as a shock to the world and to McInnis’s wife after McInnis’s death in a traffic accident. Think back to the furor over Wyeth’s paintings of Helga. There was much speculation as to the exact relationship between McInnis and the much younger Louise, which Louise has steadfastly declined to explain. Now, some 35 years after his death, Louise reveals that McInnis gave her three paintings, previously unknown to exist and worth millions, and that someone has stolen them from her house in Grand Marais, Minnesota.

Louise teaches art in her home, and any number of people have reason to be there. Mac starts checking into all her visitors to identify the likely candidates for theft and almost immediately the name of David Montgomery, a handyman who was in Louise’s house multiple times during the week in question, pops up. When Mac goes to Montgomery’s house to interview him, Mac finds Montgomery shot to death in what could be a suicide but maybe not. The local police are interested in Mac, since he found the body, and also are not especially happy to learn he’s carrying out an investigation on their turf of a major theft they didn’t know about.

Mac manages to placate the police and goes about his inquiries, managing to incur the ire of some local thugs who follow him across the border into Canada. Fisticuffs and gunfire take place, and the hoodlums are taken into a custody in a country other than their own. The ensuing quick tutorial in the gun laws of Canada was fascinating.

Of course it’s all more complicated than that, as usual in this series. Another fine entry, with the next one to be released in July 2020. One point against it: The typos in the book jerked me out of the story more than once. “Publicaly”? “Indentify”? Come on, Minotaur, you’re falling down on the job.