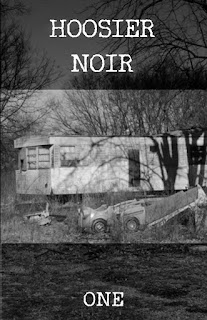 Hoosier Noir: One is a crime fiction magazine aimed at Indiana. Published by First City Books, the read came on the market in recent weeks and looked interesting, so I picked up a copy. Available in print and eBook versions, I went with the digital file and bought this by way of funds in my Amazon Associate account. I knew going in that this was going to be crime fiction and expected tales with hard edges. That is exactly what I got and more.

The issue opens with “Dunn and Dunn” by J. Travis Grundon. Dakota Fisher saw the Dunn boys while he was out in the woods doing his own less than legal thing. Rodney and Wayne saw him and that is a disaster. The only chance he has to live is to run as far and as fast as he can through the woods. If they catch him, he is dead. No doubt about it.

That story is followed by an interview titled “Interrogating Rex Weiner.” His new project in his Skull Snyder detective series, the planned new Ford Fairlane adventure, Noir at the Bar, various publications that have his short stories, and more are discussed here in the wide-ranging interview.

“Author Spotlight: Alec Cizak” comes next and focuses on “Last Exit before Toll” by him. A night of partying is ending for two young ladies. At least it is for Jessica who is calling it quits. Emily plans to keep going as the DJ seems to be very interested and she may finally succeed in getting him.

There are people rolling through social media on a daily basis trying to set off judgmental firestorms on others. We have all seen it if we have not been arty to it in one way or another. That concept familiar to us all if the point of the next story. Brian Klein in “Destroyers” by Alec Cizak is one of those people who lives to rain judgmental social media fire down on others. What he does is the focus of this tale that says a lot about the state of the world today.

Preston Lang is up next with “Descent.” Mr. Kent’s report of his missing husband is not being taken seriously by Police Chief Lohta. Maybe he does not care for homosexuals. Maybe Chief Lohta and his police force are incompetent. Hal is missing and, at this point, nobody seems to care.

Sometimes you must shoot somebody twice. One so they understand the reason why. The second to end them. He did it in “The Iceman” by Les Edgerton. For good reason too.

Rebecca is in a justifiably bad mood “The Haunted Crave Knowing” by J. Rohr begins. The woman on the porch is looking for Doug Conover as she needs help. Too bad he is dead. Rebecca is her only option now.

The cleanup after a killing is the hardest part. That is, if you do not want to get caught. Bleach is very important in “It All Comes Out In The Wash” by N. B. Turner. 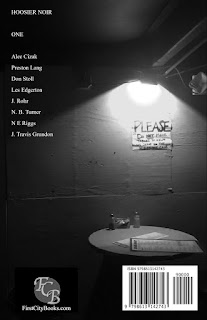 The first killing was sort of an accident. A thrilling accident. Travis figured out he liked it in “The Selfie Killer” by N. E. Riggs. The trick is to keep it going.

Bobby Conrad is one of those guys that names his own male anatomy. He brags a lot about that and other things in his small town of green apples, Indiana. A current murder case involving Jim and Molly Wagner might prove him wrong on some stuff. “Dick Pic” by Don Stoll concludes the issue.

Along with the crime fiction and the interview, there five illustrations and photographs to provide breaks in the reading. Also present are a few scattered ads for books and other short story publications. All of those present nicely in the eBook version and no doubt appear even better in the print version.

Hoosier Noir: One is an entertaining and well put together read. The stories are all crime fiction so things are graphic especially in terms of language. These tales are noir and that means they are dark. If you are looking for sweetness and light, this is not the read for you. Along with the quality fiction showcased in this first issue of what hopefully will be a series, the photographs and artwork are a nice added touch and fit well in context.  Hoosier Noir: One is very much your time and money. Simply put, this is good stuff.


I picked up my copy back in February using funds in my Amazon Associate account.