Sordid: Five Crime Stories by Harry Hunsicker is a collection of five previously published tales. As made clear early on, these are “Five Crime Stories about Amputee Strippers, Drifters, Meth Heads, and Other Lost Souls.” The read is exactly as advertised. This is not a cozy style read. This is graphic, often violent, and is a very good read.

“The Color of Home” starts things off with the perspective of a man fresh out of Huntsville with questions that he wants answered.  He did the time so that his baby brother, Donny, did not have to do it. He kept his mouth shut on who else was also involved in the job. Now, fresh from prison, he does not want to deal with a welcome home party. He wants answers.

They have a plan and need to get the money together before they can do what Vivian wants. Shooting the store clerk dead, may or may not, have been part of the plan in “Vivian and Bobby Ray.” The deed is done either way. Other things have to be done so they get the money they need for the future life they want.

Chrissie and Tom dumped the body of Bijoux Watson into the Brazos River and watched what was left of him float around the bend out of sight. That killing was a release in more ways than one as readers soon learn in “Iced.” While killing him did work in their favor somewhat, killing him in his lemon-yellow Jaguar was a mistake. At least the way they did it.

Nobody was supposed to fire their gun and yet his partner did as “West of Nowhere” begins. So much for quietly robbing the private poker game in the bar. It is so hard to get good help these days.
Robbing folks is at work as well in the next story where the great-great-grandniece of Bonnie Parker, Nadine Parker, is continuing the family tradition in “The Stickup Girl.” She does her robberies with her twin sister, Chloe. It beats being the night clerk at some crummy store or being a stripper on the pole. Until it does not.

When you guys think about it, a Ferris wheel is truly a “Wheel In The Sky.”  This one is at the Texas State Fair in Fair Park. Connie and her guy are on the ride of their lives in this quick tale that brings the collection to a close.

These are meaty crime fiction stories, as such these tales feature graphic and detailed situations, language, violence, and more. No cats are involved and nothing is cozy in this intense read. If you like hard hitting crime fiction, Sordid: Five Crime Stories by Harry Hunsicker is a read well worth your time and money.

I picked this up back in March to read and review using funds in my Amazon Associate account.

Your reviews are appreciated!

Thank you. There are times when I really wonder why I do any of this anymore. Then I get messages like this....thank you.

Big time thanks to the voters as well all the folks here like my son, Scott, Aubrey, Barry, and the many guests and other folks who have k... 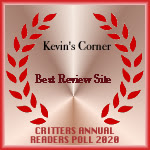