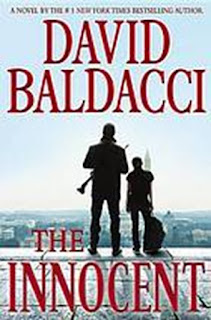 I have been reading some of David Baldacci’s earlier books after learning he has created eight sets of series characters in addition to writing several stand-alone novels. Most of them are classic thrillers but there’s a fantasy series for young adults I didn’t know about. The first book in his Will Robie series, The Innocent, was published by Grand Central Publishing in 2012. It falls about midway in his prolific career that started in 1996, with 22 books released before it and about as many afterwards.

Will Robie is a U.S. government assassin, a sharpshooter sent in when nothing else will solve a threat to the nation. His planning and replanning a job for days in advance meant each one always went off without a hitch. Until one didn’t. Robie was forced to activate his private exit strategy that he created along with his initial plan of action, which he had never had to do before. This particular plan led him inadvertently to the company of a resourceful teenaged girl named Julie, also on the run. Robie is determined to protect her, even though his own safety is at issue. While Robie is trying to unravel what went wrong in his job, he’s also trying to sort out the mystery around his unexpected companion. A loner by necessity, this addition to his operation threw him off balance but someone is hot on their trail; he needs to know which of them is the target and why.

This is a highly readable thriller, even if the premise is hard for naïve readers like me to accept. Will Robie is a sympathetic character despite his wholly unsympathetic occupation. Julie is great; she is a certifiable badass, even at 14. Her future, if she manages to survive the present, is limitless. I always question the realism of the portrayal of FBI agents in fiction, having met a few in real life, but Special Agent Nicole Vance makes a good foil for Robie.

I especially liked the setting in the metropolitan Washington, D.C., area; I could follow Robie’s path as he drove around the region. The story seemed to go into a loop about halfway through, however. It was still moving and still easy to read, but it didn’t seem to be moving cleanly toward a resolution. Fifty pages could have easily been edited from the story without hurting it at all. Nonetheless, fine escape reading while waiting for spring to arrive.