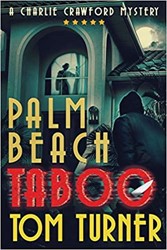 Tom Turner used his New York advertising copywriting experience and his life in Palm Beach, Florida, as the basis for this series of police procedurals featuring homicide detectives Charlie Crawford and Mort Ott. He seems to have had a lot of material, publishing 10 books in the series since January 2015, as well as starting two more series set in Charleston, South Carolina, and in Savannah, Georgia.

Palm Beach Taboo, independently published in paperback and in ebook by Tribeca Press in January 2021, opens as Crawford and Ott are called to a mansion in the middle of the night where they found the bloody body of Christian Lalley and a number of people who all seemed to live there. Questioning revealed that they were members of a secretive organization known as SOAR, ostensibly dedicated to philanthropic causes. The detectives recognized the signs of a cult. A wealthy cult that owned five mansions in the immediate area and whose members are all part of Mensa, the high-IQ society.

Having a high IQ does not necessarily ensure integrity, kindness, and a dozen other desirable qualities, as Crawford and Ott discover. Background checks showed that nearly all of the society’s inner circle had a dubious past and some of them had criminal records. The leader managed to attract wealthy women who gave their money to the society, enabling its associates to live in luxury. The death of one of these donors a few months earlier from an aneurysm promptly caught the detectives’ attention. In short, they have a lot to work with, and the members are not especially cooperative.

Turner has a following on Amazon of a few hundred readers, who consistently rank his books as four stars or better. I understand their enthusiasm: Taboo was quite readable. It offers fresh characters, an unusual plot, a setting that’s been in the news for the past few years. The police work is sketched in enough detail to be credible and the action is evenly paced. However, Turner does not seem to run his drafts by an editor, even a basic copyeditor. One of them would have caught his consistent misspelling of the word “aneurysm”. A content editor would have smoothed the occasional ragged writing and helped with the sometimes messy dialog. In addition, members of Mensa International are known as “Mensans”; Turner calls them “Mensas.” A little research, such as reading the Wikipedia entry on the society, would have gone a long way here. Nonetheless, good escape reading for these pandemic times.