With the recent weather event that had a devastating effect on Texas, Texans, and our power grid, it seemed like a good time to remind you of another potential threat to the Texas power grid. My review of The Grid: A Jon Cantrell Thriller by Harry Hunsicker first ran in October 2015. Just like the weather threat that remains as some in the Texas leadership have already started backing away from needed fixes they promised to undertake, nothing has actually been done about this issue either. 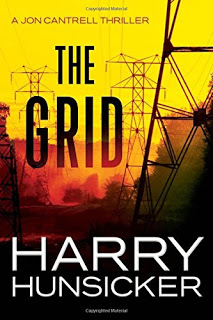 This third thriller in the series (The Contractors and Shadow Boys) finds Jon Cantrell away from Dallas and down the road to the south about a hundred miles. Now, a few months after recent events, he is the relatively new Sheriff Jonathan Cantrell of Peterson County. Located in the Waco area, the county has various businesses including a private run for profit prison. It also has an out of control deputy wanted for drug abuse and beating on his wife (currently in the hospital recovering from broken ribs, a cracked orbital socket, and other injuries), as well as some other legal issues. When found, the man isn’t going to go peacefully.

Jon Cantrell got his job thanks to his checkered past and some connections he has made over the years. All of that is about to haunt him again when Price Anderson shows up. These days he is head of security for Sudamento. They own a third of the electric power plants in Texas including at least one in the immediate area. Based on the two area wide power failures in the last 90 minutes during this clear and hot day, they have a problem. 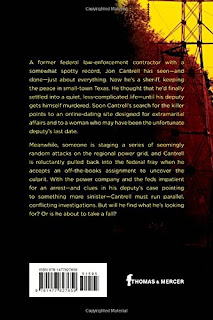 A problem that Jon Cantrell wants no part of as his current job is a chance at new start and some stability in his life. He has plenty to deal with privately regarding Piper and their new baby, not to mention the situation involving the deputy. Before Cantrell could get the deputy into custody he got himself murdered. Cantrell probably even saw the suspect leaving the scene at a nearby motel. None of that matters to the multiple tentacles of Federal Law Enforcement that insist he must become fully involved in the apparent attack on the power grid. He could refuse as this is America after all, but they have plenty of leverage that can be bought to bear to make his life unbearable.

The Grid: A Jon Cantrell Thriller is another good one that shifts in point of view from Jon, to the killer, and a few others at various points in the complex three hundred plus page read. Frequently graphic in terms of violence and sexual content, Cantrell works multiple investigations that span significant sections of the state. Neither situation is easily solved which makes for quite the read in The Grid: A Jon Cantrell Thriller.

The Grid: A Jon Cantrell Thriller