Review: What Waits For You: A Tully Jarsdel LAPD Novel by Joseph Schneider 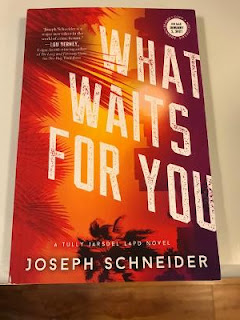 What Waits For You: A Tully Jarsdel LAPD Novel by Joseph Schneider is the second read in the series that began with One Day You’ll Burn. While an interesting read, for this reader, it was not the same level as the first book.

A serial killer is at work in Los Angeles and getting massive media attention. Dubbed “The Eastside Creeper” by the media, it is believed the killer lives undetected in the home of his intended victims for days before he attacks. He studies their habits before he unleashes a brutal attack on everyone in the house regardless of their age. Each kill is itself its own gruesome story as each body is brutalized and mutilated in some horrific way.

Tully Jarsdel still works in HH2, The New Hollywood Homicide, at Hollywood Station. He still is not fitting in with his fellow officers and detectives. Not only is he still resented for the way he was fast tracked into the job, the former academic is far more comfortable with books than people. A major source of annoyance is his pretentious boss.

Lieutenant Gavin’s idea of bringing in Dr. Varma, who has some radical ideas to address the rising murder rate and other crime stats, does not sit well at first with Jarsdel. Her ideas could work, if the department as well as the people they serve and protect, accept them as necessary and worthy. Beyond her ideas for engineering the environment, she is a person of intellect and somebody who can make Jarsdel think while also personally and directly breaking him out of his academic shell.

The personal and professional situation with Dr. Varma runs a parallel track with the chase for “The Eastside Creeper.” As the kills mount and politics in the station work against him, he is assigned to “The Creeper Task Force” downtown at Homicide Special. Not only is it a way to get him out of the Hollywood Station, it very well could be the first step in disbanding HH2 like Lieutenant Gavin has long wanted to do. Jarsdel is also aware that task forces are often made up of not the best and the brightest, but a way to get rid of officers others perceive to be a problem. 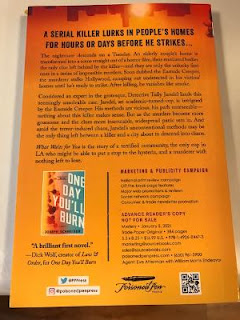 What Waits For You: A Tully Jarsdel LAPD Novel by Joseph Schneider is an interesting and often slow moving read. Academic theory makes up a large part of this read where multiple discussions of various people and events as well as psychological concepts and environment engineering regarding crime policy, while interesting, slow down the action and the hunt for a killer. In addition to being a slow moving read, it seems to be a read that is, at times, designed to gross out the reader in unnecessary ways.

While I very much enjoyed the first book, One Day You'll Burn, this read was a struggle to finish. How much of that was due to an actual sophomore slump, the ongoing mindset of the reader, or something else, I do not know. If the same thing persists with the next book in the series, I will be done.

For another take on the book, please see this review by Lesa Holstine.

What Waits For You: A Tully Jarsdel LAPD Novel

My read was an ARC provided by the publisher via Goodreads.

Actually, it sounds as if you and I had the same reaction to the book.

Overall, for different reasons, I think.