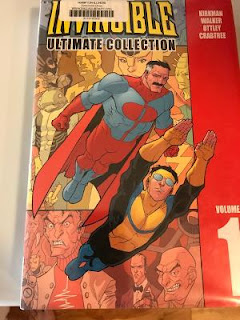 Invincible: The Ultimate Collection, Volume 1 by Robert Kirkman collects the first 13 issues along with extra from this series which is being adapted for release on Amazon as an animated series later this year. The series has also been purchased by Amazon to adapt as a live action movie separate from the animated television series. Robert Kirkman who is most famous for creating the comic book horror series The Walking Dead launched the TV show. Instead of writing another horror series, he created his own Superhero Universe through 144 issues and numerous tie in titles. It was one of their most successful titles published by Image.

Being an Image Comic allows more leeway than a DC title or a Marvel title would allow. A typical DC or Marvel comic expects more than one writer to write the character over time. Therefore, major changes are not allowed to happen that unravel or break the status quo of the universe. Often a writer with those publishers comments about “putting the toys back in the toy box” for the next writer. Meaning, for example, that characters can’t stay dead or if a bad guy becomes good he has to eventually return back to evil. It is expected that the character will be used again and therefore had to be returned to the original status quo. 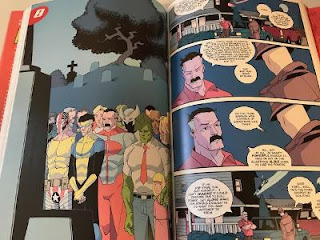 Since this is Robert Kirkman’s creation, if he kills off a character, they stay dead. Changes can and often are permanent and there are definite end points. This also means the writer working in this universe can just tell the story in their vision and not have to set up any return to the status quo. For example, in this universe, a character stays dead unlike elsewhere that the reader knows the death of Batman is temporary. This can be used by a good writer to make things more interesting.

This book collects the comics that covered the origin of Mark Grayson who is the hero known as Invincible. He is a typical teenager except for his major secret. His Dad is Omni-Man. Omni-Man is the most powerful hero in this universe and considered the paragon of what a hero should be. Mark Grayson is developing powers of his own and wishes to become a hero in his own right. He is still in high school but thinks he can find a balance between being a hero and a teenager. 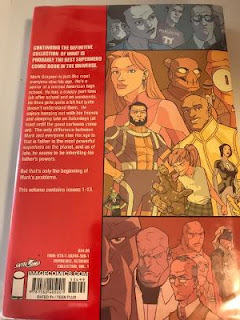 While this does not sound like the most interesting storyline ever, there is a major twist that makes the story very different than what many readers expected and caused the series to be incredibly so successful. That twist is one of the main reasons that Amazon bought the rights to this series. That twist also comes to play in the last few issues and turns things far more violent and more of an adult story. In the comic book community, it is widely accepted that this is a series that gets better as it goes. That was also my experience here with Invincible: The Ultimate Collection, Volume 1 by Robert Kirkman.

The sequel, Invincible: Ultimate Collection, Volume 2, is here in my TBR pile from the library.

My reading copy came from the Hampton-Illinois Branch of the Dallas Public Library System.