As this review came up in my Facebook feed yesterday, it seemed to be a good time to remind you of this review from five years ago. 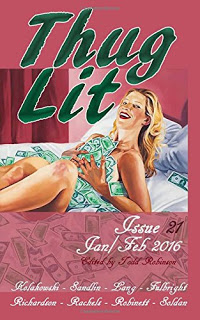 Thuglit: Issue 21 continues the anthology tradition of hard hitting noir stories. Eight new stories that tell tales of folks living on the edges doing what needs to be done due to compulsion or to survive. Of course, since these are short stories, it is not possible to say much as to do otherwise would create spoilers. It can be said that, as always, these tales will make you consider your own circumstances and the realization that things could be far worse.

It was a street kid and his dog near an on ramp in Sacramento that caused Alan to stop in “The Long Drive Home” by William R. Soldan. Hopper and his dog, Maggie, are headed to Chicago to see family. Maggie is a far better traveling companion.

If you have kids you are probably well aware of the issue of life threatening nut allergy as no doubt at least one kid in the school your child attends has this life threatening problem. “Nut Lobby” by Preston Lang takes a different tack on the idea by focusing on the lobbyists of both sides who make presentations before school boards and the like. For Lydia Todd of the national peanut council it is a life and death battle as well.

At least this time when he wakes up Fred does not find a dead hooker in the bed with him. Still, he knows Connor did something really bad. He is about to find out what that was in “Being Fred” by Travis Richardson opens thanks to a phone call from Vladmir Dvoynev. A wakeup call from him, or any other time, can’t be a good thing.

Back in Oct. 2012, the gigantic statue known as “Big Tex” burned down to its metal frame at the Texas State Fair. It was not terrorists, as first reported by local television stations, but a simple electrical short. A fictionalized version of that fire is just part of the deal in “The Night They Burned Ol’ Big Tex Down” by Christopher Fulbright. All Darla-May and Ray have to do is get rid of Toby when the moment is right. Fair Park in Dallas is a long way from Afghanistan, but a bullet does the same damage/death thing everywhere.

Jamie insists on being a virgin and plans to remain so. They have known each other since the first grade as Jamie lives down just down the street. It isn’t surprising that sometimes the narrator goes to the woods behind the house to check out the bedroom view in “Virgin Sacrifice” by David Rachels. Graduation is coming and there are plans.

Cici has been gone for a few years, but is back in Maui. In “Paradise” by Rena Robinett, Trelani is missing and Cici is on the hunt as a mother does what she has to do. 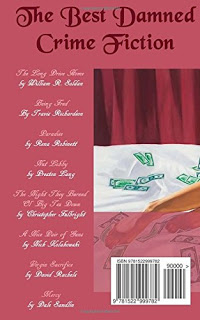 Bad enough to come home and find your place ransacked. Your daughter’s toys were one of the few things not messed with while you and your family were at the movies. Especially annoying to find out that your two AR-15s are gone. In “A Nice Pair Of guns” by Nick Kolakowski the hunt is on for the guns and these responsible.

His father Hal told him to only trust his eyes and ears and ignore what was on television and in the paper. He apparently never said a word about watching out for stuff falling on your head by the way of a crane on the hard docks of Oakland. He certainly isn’t going to say anything at all how thanks to the blow caused by six tons of Malaysian tin hitting his head. Jimmy is still coping with the aftermath of that is so many ways in “Mercy” by Dale Sandlin.

The bios of eight authors involved and the editors Todd Robinson, Allison Glassgow and Julie Mccarron bring the latest issue to a close.

If you have read Thuglit before you know what you are in for as this issue meets high standards. If you have not, this series is not about unicorns and rainbows. If any are present, they are because of your imagination is in whacked out over drive as you have been chasing meth and alcohol the last 36 hours in a desperate attempt to get some money together in a cock eyed plan to rip somebody off. Or, somebody hit you over the head and you had strange dreams while lying unconscious as god knows what went on around you and to you. Thuglit: Issue 21 is another dark read and another good one.

Material was purchased to read and review back in late January by way of funds in my Amazon Associate account.

Todd put out good issues for a long time. What a job it must be. And he had great covers.

Absolutely. I still have issues to read in the eBook TBR pile. Everything in that pile gets shuffled down with new things on top. AT least the print stuff here in the various piles can glare at me as I move by them.

Reads as if a good issue, though I'd suggest that cover has a better concept than execution.