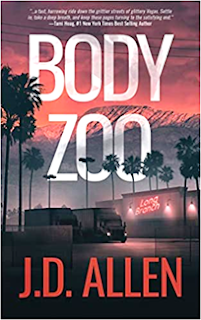 J. D. Allen is an accomplished writer, having published a number of romances before turning to crime fiction. In addition to contributions to various short story anthologies, her first full-length novel introduced the Sin City Investigations series and Jim Bean, former cop, now private investigator in Las Vegas, in 2018. Bean’s third adventure is Body Zoo, published by Severn River in June 2021. Number Four is scheduled for release in August 2021.

Bean is hired by an insurance company to look into a possible arson involving an old trailer. The trailer park in question has filed two claims already this year, and the insurance company is understandably cynical about a third one. They believe the owner is upgrading her rentals on their dime, but they need proof to deny payment. Bean visits the torched trailer and interviews the arson investigator as well as the owner. He’s struck by the lack of interest in the tenant, who has disappeared. Emilee Beck seems to have evaporated, which worries Bean. A young woman alone should have someone interested in her wellbeing. Bean decides that person is going to be him.

Tracing her associates leads Bean quickly to her boyfriend AJ Ward, son and nephew of a pair of brothers who run a profitable sports, hunting, and taxidermy emporium in the area. AJ disappears soon after Bean starts inquiring about Emilee, and his worried father retains Bean to find him. Everyone assumes that he’s joined Emilee, so locating one will locate both. They learn that Emilee is on the run from a motorcycle gang who kidnapped her as a child and pimped her until someone helped her escape. With a price on her head and strong memories of the abuse she endured, Emilee is desperate to avoid capture.

Alternately told from Bean’s perspective and Emilee’s, the story becomes intense. It is a realistic and grim depiction of a human trafficking survivor, a subject of deep concern to Allen, with good cause. I was shocked to learn a couple of years ago that the county I live in is the fifth most likely locale in the United States for human trafficking and that a nearby shopping center is an ongoing focus of law enforcement investigation because of known criminal trafficking activities there.

The seriousness of the plot is balanced with ingenious settings and offbeat characters. For instance, Bean’s favorite greasy diner converted into a vegan café, but he continues to eat there despite not really caring for the food. His associates are great. My favorite of Bean’s sidekicks is a Vietnam-era veteran who can hack a computer with the best of the teenagers around. Well written, fact based, fast moving, intricately plotted. An absorbing book but may trigger more sensitive readers.