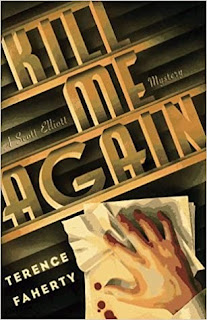 Terence Faherty is the author of two mystery series, a fan of old movies, and a fellow Hoosier. He also has a beautiful signature which he obligingly placed on a few of my copies of his books when we met at a conference.

He channeled his knowledge of old movies into his series with Scott Elliott. Elliott has something of a love-hate relationship with Hollywood. A promising actor before the war, upon his return no one is returning his calls and he perforce falls back on a job with a second-rate security agency who sweeps up or covers up at the film studios’ behest.

The first in the series Kill Me Again (Simon & Schuster, 1996) opens in 1947 when Hollywood was facing a double crisis: the arrival of the new medium of television, which threatened the film industry’s existence, and the attention of the House Un-American Activities Committee, which altered or ended the careers of more than 300 directors, radio commentators, actors, and screenwriters. Elliott’s company has been retained by Warner Brothers to find out if Bert Kramer, the screenwriter for Warner’s sequel to its World War II blockbuster film, has any Communist connections. That reliable source of information, an anonymous letter, has cast aspersions on Kramer. Warner can’t afford any trouble and is poised to toss Kramer out but wants to salvage his script first.

The problematic Kramer turns up dead shortly thereafter. The police find no shortage of people that Kramer had alienated. But then they wonder if someone at Warner Brothers took a shortcut to its personnel problem or if one of Kramer’s Communist cronies killed him to keep him from outing others. Elliott’s investigation takes him around Hollywood and Los Angeles and east to New York, where some references to Broadway are folded into the story.

A well-written and cerebral look back at old Hollywood. Six more titles follow this one, the second won the 1998 Shamus Award for Best Novel. The fourth and seventh titles were shortlisted for the Shamus Award. Highly recommended for fans of classic movies, post-World War II historical mysteries, and mid-century Los Angeles.