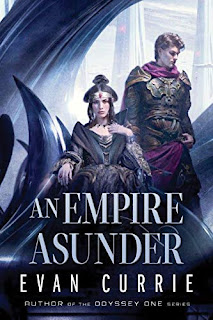 An Empire Asunder by Evan Currie is the sequel to Heirs of Empire and begins a short time after that first book. As this is a series where one book builds on another, it is impossible to discuss anything in this book without causing some sort of spoiler for the reader. Therefore, the review below does contain some spoilers, but those details are limited as much as possible.

In this novel, the royal twins have moved into new positions as the young prince has joined the Cadre and the young princess has become Empress. The war between The Empire led by the twins vs the Alliance led by General Corian escalates. Mira Desol, after the events of the first novel, took off with the Caleb Star and has been using it and her crew as a self-proclaimed pirate to raid Corian's forces. Corian, who was severely injured, has become increasingly unhinged as he enacts his latest sinister plan to take the throne. On separate paths the young prince and Mira seek to uncover Corian's evil plot.

An Empire Asunder is very much like the first book. If you read it and enjoyed the fast-paced action with strong character relationships and banter, you will probably enjoy this novel. The addition of Matani, a seasoned Cadre member who was retired but has come back to teach young cadre members, was the best new character with his general attitude of world weariness was highly entertaining. Among other duties, he is attempting to turn the young prince into a soldier. Once introduced, he provided many observations and comments that served to move things forward as well as entertain this reader. 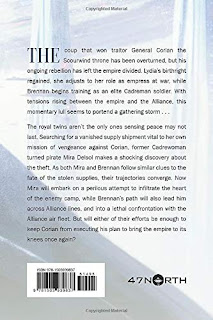 An Empire Asunder by Evan Currie is a good book that continues the events of the first one. Published in 2016, the read is clearly a setup for the next novel in the series, but the author has not announced one at this time.

An Empire Asunder: The Scourwind Legacy Book One

My reading copy came from the Oak Lawn Branch of the Dallas Public Library System.