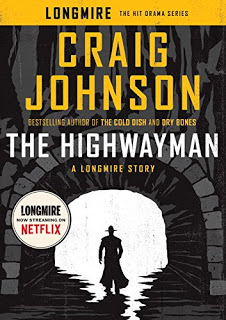 There is a legend regarding the Wind River Canyon in Wyoming. The legend has several pieces including a piece involving a highway patrol officer by the name of Bobby Womack who had a complicated career tragically cut short in a fiery crash decades ago. It is a place where strange occurrences are customary, radio communication is still nearly impossible, and very old gold coins appear on the roadway right before major events.

It is according to newly transferred highway patrol officer Rosey Wayman, a place where she can hear “officer needs assistance” radio calls from Bobby Womack. Such a call sends fear and stress through any officer. That response is made worse by the fact these calls come from somebody who can’t possibly be alive and no one else has ever heard the middle of the night calls. Sheriff Walt Longmire knows her to be a good and solid officer and intends to get to the bottom of the mystery.

Others think there is no mystery. Their perception, whether they say it or not, is that Officer Wayman is nuts. Her supervisor wants her to have a psychiatric evaluation. Such an evaluation, even if she would pass the test, certainly isn’t going to help her career prospects. Trying to convince others of what she has heard these last three months is beginning to take a serious toll on the young officer. She needs Sheriff Walt Longmire and the Henry Standing Bear to prove she isn’t crazy.

This is a heavily atmospheric mystery tale that is a really good one. There has always been a hint of the unexplained by in the stories of Sheriff Walt Longmire. It is a much heavier presence in The Highwayman where the mystery has a modern component as well as pieces of what legends are made of. The paranormal or the unexplainable has a strong presence in the tale and has not surprisingly generated quite a few negative reviews on the various review sites. As has the publisher price of this novella which is as high as a full length novel.

Don’t pay any attention to the naysayers. Much of their negative commentary is driven by either failing to understand the storyline or by being annoyed by the price set by the publisher. Either situation has nothing at all to do with the actual read. It is a fast moving novella that that is part mystery and part psychological suspense. Not everything in the world can be easily explained and that is certainly true in The Highwayman: A Longmire Story by Craig Johnson. It is also a very good book.

For another take on the book, please check out Lesa Holstine’s review.  While checking that out make sure you also check out the Wind River Canyon on America’s Scenic Byways as well as the tunnels on Bridgehunter.com.

The Highwayman: A Longmire Story

I love Longmire, so this review caught my attention. Thanks for the heads up.

His new book comes out in September.