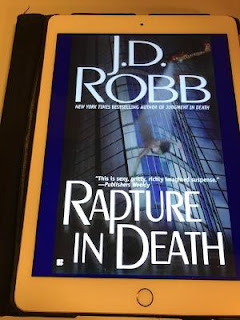 Rapture in Death by Judy Robb picks up approximately three weeks after the wedding between Lieutenant Eve Dallas and Roarke in Immortal in Death. After an offworld honeymoon that that fully involved Dallas personally and professionally, Lieutenant Dallas finds her old desk more buried than it was when she left. She has paperwork to do, court hearings to attend and testify at, and soon a murder to solve.

Or, that murder could be a suicide.

NYPD Homicide Lieutenant Eve Dallas does not think so. Just hours after high priced defense attorney S. T. Fitzhugh tried to trash her, her character, and her investigation, in defense of his client, Fitzhugh is found floating dead in his tub in his home. A hand that is hanging over the edge of the clear tub has a gaping wound and has let blood flow out over the titles. More blood is in the water making it clear that there are other injuries as yet unseen. The knife, presumably the tool of choice, is present. It has all the appearances of a suicide though Dallas isn't so sure.

Before long, she is sure a murderer is at work as Fitzhugh isn't the only apparent suicide. Proving that the cases are linked and are actually murders is getting increasingly difficult. Not only due to the pressure coming at her from all sides, but the sheer lack of evidence. Somebody is playing god, she is sure of it, but finding proof and the identity of the person or persons responsible is proving nearly impossible in Rapture in Death.

This is the fourth book in the In Death series written by J. D. Robb. Police procedurals set in the late 2050s, these books feature complicated cases, flashes of humor, and often graphic sex. While all that is fine this reader, I remain annoyed by the abrupt head hopping pov switches through multiple characters in the same paragraph. The writer and editor in me screams when I see them as that is slopping story telling. However, that being said, I must admit that what seems glaring obvious in the first part of these books, fades to the background as the story progresses and I get lost in the read.

These are fun books that serve as a nice break between reads for me. I recognize the flaws while I also recognize that they are highly entertaining. Like any series, one should read in order. However, each book has brief recaps of what went on before and therefore one can pick up any one of the first four to start and have a pretty good idea what has been going on in the series. A fun series that should not be taken too seriously, Rapture in Death is an enjoyable read.

My copy came via the LibbyApp from the Dallas Public Library System. Big time thanks to my son, Scott, as always for making the technology work for me.

I find this series mediocre at best and that is being kind. I have yet to read a mystery/sf novel by a vromance writer that was any good.