FFB Review: A HUNGER IN THE SOUL (1998) by Mike Resnick Reviewed by Barry Ergang 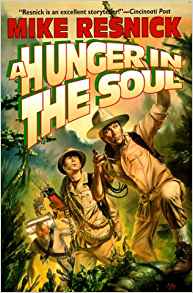 Michael Drake hasn’t been seen or heard from by Men for fifteen years, but he’s famous throughout the Democracy as “the man who developed the ybonia vaccine,” which saved billions upon billions of lives, and for which “he refused all payment or royalties.”

Enoch Stone, the story’s first-person narrator, is “the first Man to set down on forty-three different worlds,” as he explains to one Robert H. Markham: “I’ve seen lakes and mountains and deserts no one else has seen to this day. I’ve brought back half the animals that are mounted in this…museum and half the artifacts that are on display.”

Stone, who lost a leg in a previous expedition and has a prosthetic, and who suffers from recurrent bouts of jungle fever, is presently a museum staffer who hates his work compared with that from his previous life, but who bitterly accepts its necessity.

All kinds of reasoning suggests that Michael Drake may be dead or, if alive, not wanting to be found. Robert Markham is a glory hound journalist with seemingly unlimited funds backing him who is determined to find Drake and bring him back to find a cure for a mutation of the ybonia virus that has spread to three hundred worlds. Drake was last seen on Bushveld, and Markham wants Stone to put together as quickly as possible an expedition to that “totally undeveloped world.” Markham has already hired two holographers who will record the entirety of the expedition.

Despite his dubiety about the project, Stone finds himself making out a list for Markham indicating what kinds of help, weapons, clothing and other supplies they’ll need, thinking “It’s amazing what a man will do when presented with the possibility, no matter how remote, of galaxywide fame.”

Thus begins an expedition in which the participants thereof encounter all manner of obstacles—some fatal—and in which several of them reveal their true selves, a couple of whom are close friends of Stone, but most notably Markham, whose self-aggrandizement is both callous and boundless, and about whom Stone says: “It was not the first time I wondered if he was simply too brave by half, or out-and-out crazy.”

Narrated in a straightforward prose style, A Hunger in the Soul is, typical of Resnick, a fast-moving science-fiction novel that is compelling and adventurous but far from superficial. It’s one of those character studies that will leave readers with significant afterthoughts, especially when it comes to the price of fame and power and immortality.

Does Markham find Drake? A Hunger in the Soul is gnawlingly worth a reader’s time to find out.

Barry Ergang’s parody of Mike Resnick’s novel The Soul Eater is available at Amazon  and Smashwords.