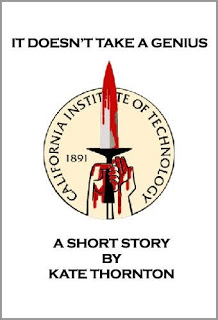 From the massive archive  ....

According to the author’s forward, the editor refused to include the short story It Doesn’t Take A Genius in the short story collection Inhuman Condition because of its “graphic subject matter.”  For those who read a lot of crime or non-cozy mystery stories, the so called “graphic subject matter” is really not that graphic at all and certainly not at all disturbing. Interestingly enough, the tale was first published in the short story mystery and crime anthology LAndmarked For Murder by Top Press in 2006.

The California Institute of Technology (Caltech) is like every other smart place in the world. The students and the faculty are really smart and tend to look down on the support staff that keeps things humming along. Especially a certain middle aged slightly overweight woman who works in payroll and accounting. The only time anyone pays attention to “Miss Dean” is when something is amiss.

That works out well for her during a lunch break from a computer training class. Two guys from another department are also in the class and they tend to stand out. Thanks to the fact they are oblivious of everyone around them and run their mouths it becomes clear that Brian Spain and Tony Brandt have a serious dark interest in the class instructor, Jennifer Pearson. She is in trouble if they really do what are planning and she has no idea of the threat. Miss Dean does, but would anyone believe her?

This is a very good tale that features an intriguing character. There is much that lurks below the surface with Miss Dean and those details gradually become clear in It Doesn’t Take A Genius.  While it easily could and should have appeared in the very good collection Inhuman Condition this short story is well worth it as a mystery stand alone.

It Doesn’t Take A Genius

I recently picked this up to read and review using funds in my Amazon Associate account after the author mentioned it on Facebook. I realized I had never read it and wanted to rectify that situation. I am glad I did.

One of my favorite setups for a story. The unnoticed woman who is noticing.

This sounds great, Kevin. I purchased a copy.

Kate writes great stuff. Hope you like it. She also has a series of science fiction/Mystery short stories that are very good and highly recommended. "Blue Plate Special" and others.