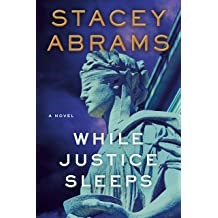 While Justice Sleeps: A Novel

Hardcover : 384 pages, also available in Kindle, Paper, and on Audible

Supreme Court Justice, Howard Wynn, lies “sleeping” in a coma. The first few pages set up the story, how he falls into the sleep, and give us background on his intrepid clerk, the protagonist Avery Keene, who has a family full of problems and no idea that the Justice is about to dump his decision-making power in all areas (health, finance, papers) on her instead of name his wife or son.

While I found the set-up pages a bit slow moving, once into the story, I realized that the complexity of the tale, needed that detail in order for our minds to follow the faster pace at which Abrams skillfully weaves together the tales of family perfidy, political perfidy, and international upset in the world of vaccines into a braid well-worth our time. Plus she adds just a dash or romance, the bow on the braid.

Abrams, while perhaps better known for her political prowess, and stunning non-fiction work on voting rights especially, is no stranger to fiction. Under the pen name, Selena Montgomery, she has written eight romantic suspense novels.

Considering the timeline involved with putting out a work of fiction with a major publisher, Abrams is also eerily prescient in giving us frighteningly realistic negative possibilities of a merger between an American and Indian genetics firm that supposedly is for curing a deadly genetic disease. Her depictions of an evil genius in the White House , willing to commit murder to achieve his aims is also terrifying. However having lived for more than thirty years in the DC playpen seen its workings up close and personal, I have to say, she has created realistic characters on all sides.

I would love to see Avery Keene apply her keen mind (pun intended) to other DC -based mysteries. Maybe a new series is in the works? While Justice Sleeps is an exceptionally good read and deserves five stars.

I was thrilled to have latched on to this book as my local librarian was setting it out.

Find it. Read it. It’s the first fiction she has published under her own name. The book is available on Kindle and at local bookstores.

Joan Leotta plays with words on page and stage. Her poetry, essays, cnf, short stories, and articles are widely published. Mysteries are favorite things to read..short and long..and to write.