Review: Dead By Dawn: A Novel by Paul Doiron 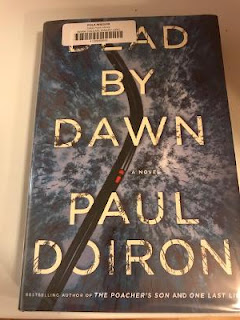 Maine Game Warden Investigator Mike Bowditch had a plan for the day as Dead By Dawn: A Novel by Paul Doiron begins. The plan is a vet visit for Shadow. The hybrid wolf/dog needs a vet visit as he continues to recover from recent events. Bowditch may also have to relocate Shadow from the acre and a half enclosure on Bowditch’s property as the new neighbors are upset that Shadow lives across the river from them. The new folks have a history of suing folks so Bowditch may need to find a new safe place for Shadow.

While in the area to see the vet, Investigator Bowditch can address a complaint from Mariette Chamberlain. Four years ago, her father-in-law, Professor Eben Chamberlin, died in the Androscoggin River. The investigators at the time, including those of the Maine Game warden Service, put it down as accidental. Mariette Chamberlain firmly believes the professor was murdered.

After seeing the vet with Shadow, it is on to meeting with Marc Rivard who was in charge of finding Eben Chamberlain. Rivard and Bowditch have a complicated history, including the fact that Bowditch played a major role in his removal from the service, so neither man is looking forward to the meeting. That meeting foreshadows what is to come as Mike Bowditch starts investigating the Chamberlain case and, within hours, injured and fighting to stay alive.

Dead by Dawn: A Novel is split between flashbacks and current time. Part of the tale is current as he fights to stay alive after crashing into the frozen and ice-covered Androscoggin River. A river that is lethal no matter what time of year. Not only is the river and the aftereffects of water immersion a major threat there is a shooter determined to finish the job.

The flashbacks are in alternating chapters and detail how the day had been going until the crash. Each flashback chapter is slightly forward in time as it details Bowditch’s thoughts and actions as he dealt with personal matters and worked the case by way of interviewing numerous people.

The result is a tale that slowly goes forward as it spends far more time in the preceding hours before he got himself in a life and death situation with few resources and no backup. A predicament that Bowditch manages to escape deadly consequences again and again by way of his training, inner fortitude, and with the occasional help of Shadow. 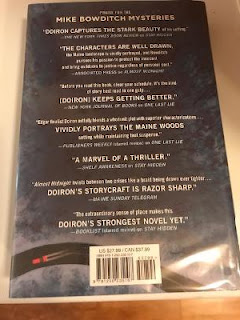 Set a few days before Christmas, the read is very much focused on Bowditch and his fight for life. Because of this, there is very little presence of Charley, Orca, and the numerous other folks who have always populated this every enjoyable series. They are very much missed in a read that also serves as a possible turning point in the series.

Dead By Dawn: A Novel is a suspense style read with some mystery present. There are a couple of mysteries at work, professionally and personally, but this is a read that is primarily a fight for survival. While a good book, it is not a great one. It also is a departure from what the reader normally expects in this series. Instead, the read here has much in common with the end of season television cliffhanger where the hero is in danger and yet viewers know that the series was renewed months earlier so there is no question that he will survive. Even when the situation is so dire a mere mortal would not. The only question is how.

Dead by Dawn: A Novel

My reading copy came from the Polk-Wisdom Branch of the Dallas Public Library System.

Nice review. You always manage to include enough about a book so a reader can make an informed decision about buying. Kudos for that!