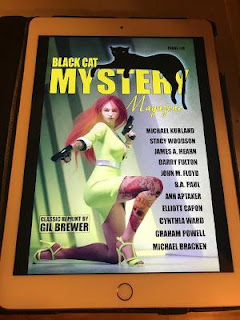 Black Cat Mystery Magazine #9 opens with a brief word from Editor Michael Bracken and then moves on to the stories. First up is Stacy Woodson with “Last Rites” where Colonel Wilson and a few of his unit were lucky enough to survive an ambush. Several were killed. The survivors have suffered significant physical and mental injuries. Thanks to Nurse Lucy and Doc Taylor, they all should be on the mend and headed home soon.

Victor Connelly has a plan in “The Jericho Train” by John M. Floyd. He knows the train schedule having grown up on the massive Connelly ranch. He has built quite an empire. The arrival of the train is one small cog in a major plan to change his life for the better. It is going to be a long ten minutes until the train arrives at the station.

Peter Shirkey also has a plan in “Coral Cove” by B. A. Paul. Painting the traffic barricades is just one small part of the plan. Being the handyman and more for the Bungalows of Briny Breeze gives him skills and opportunity.

“The Alley” by Ann Aptaker revolves around Howard Vickers and Louie Sharp. For Howard Vickers, the timing is what is a bit of a surprise. He knew Louie Sharp was going to come for him sooner or later. Apparently, it is now in a cold, dark, and wet alley. The man known as the “Angel of Death” is edging his way steadily closer.

It is 1935 and the town population of Granbury, Texas, has turned out to see “Sonny Goodman and His Orchestral All-Stars.” The band entertains for twenty-five cent a head several nights a week as they tour the southwest. They do not make very much off of ticket sales so they have to supplement that income in other ways as explained in “Sonny’s Encore” by Editor Michael Bracken.

It is the middle of March in 1978 as “Switch Bait” by Cynthia Ward begins. Bethany and Chase Hayes plan to make their displeasure with Billy Bolduc known in a public way. Boulduc is not getting how things are done in the lobster business and needs another lesson.

Professor Arnold Pugmire pulled off the perfect murder in “Becoming Zero” by James. A. Hearn. With the wealthy Texas oil man dead, now Pugmire can woo the man’s wife, Amanda. Things are now finally going to be right with Amanda as his. The money is nice, but having Amanda as far more than a plutonic friend will be far nicer.

Temptation and desperation are a combined powerful force and such is the case for the postal clerk in “You Gotta Be In It!” by Elliot Capon. The clerk has the means, motive, and the opportunity. Getting away with it is doable if things work out as planned.

“The You-Don’t-Know-The Half-Of-Dearie-Blues: An Alexander Brass Mystery” by Michael Kurland comes next. It is early 1936 and anything and everything involving the New York World Syndicate is off limits to Alexander Brass, Gloria, and the narrator. An editorial dispute has escalated into the trio being banned from the newspaper property because Brass thinks Dr. Weld is not guilty of murder. Banning him means they now have the freedom to chase the story and prove it.

The fighter Charley Robertson was getting treatment post fight when Mr. John Massey and his group barged into his dressing room beneath Madison Square Garden. Massey bought his contract and is now his manage in “A Fighter By His Trade” by Graham Powell. His new manager is going to change his training schedule and a lot more.

The issue closes with “Smelling Like A Rose” by Gil Brewer. In this classic reprint, Mr. Vince Helman is doing everything he can to keep it together. The woman is the next cottage is certainly no help with that.

Black Cat Mystery Magazine #9 is another all around solidly good issue. The tales, past and present, often share a common theme where the plan does not work as expected. In rare cases, the plan worked out as ultimately intended thus proving the idea that crime can pay and pay very well. As on expects with this publication, the tales selected are good ones and are well worth your time to read.

I bought the eBook copy of the issue back in January 2021 to read and review.

It's always a bit strange to suddenly be reminded of how historical 1978 is these years...more than forty years ago, that year in which I began to buy and read new fiction magazines with alacrity...and the likes of THE ATLANTIC MONTHLY, in those years rarely with less than two short stories in each monthly issue, similar to this new magazine, OMNI, and fewer, as it turns out, than this woman's magazine REDBOOK usually (still) did...though I didn't learn about that yet...but had long known that PLAYBOY usually had two...three magazines now gone...and THE ATLANTIC now simply a duller, smarmier version of itself...

1978 I was in the middle of my High School years. Mom read REDBOOK and never said a word about short stories being in it. PLAYBOY was not coming into this house. I was reading OMNI. Had no idea THE ATLANTIC MONTHLY existed.

Back them most of my reading was books as each Saturday we went to the Audelia Branch Library and much of that was spy fiction of various types (books Mom and Dad recommended) and science fiction.

Cool. 1978 for me was the year I finished 8th Grade and began 9th, and the floodgates of fiction magazine gathering and reading began with the purchase of the (Still 75c!) January 1978 issue of AHMM, I having read and even obtained some back issues of HITCHCOCK'S previously (along with the Best-of AHMM Dell volumes and the Even Better Robert Arthur and Harold Q. Masur AH PRESENTS: volumes in book club hardcovers or split/fiddled-with Dell paperback two-volume reprints, when not simply borrowing the PRESENTS: volumes and AHMM issues from the library earlier. I certainly scoured every library I had access to, particularly the nearest good one at that time, the Nashua, NH, public library.

Alas, for me, REDBOOK was not one of the women's magazines my mother picked up, and the earlier '70s purchases of PLAYBOY (and my mother's PLAYGIRLs, which also carried gratifying number of images of nude women along with the much less interesting men) diminished considerably after the folks realized I would find them. But with back issues of F&SF and FANTASTIC and GALAXY from the junior high library sending me in search of new issues, and such discoveries as EQMM (which my mother had subscribed to in the '60s) and SHORT STORY INTERNATIONAL along with everything else that looked at all interesting, I definitely had a new drain on my informal allowance...