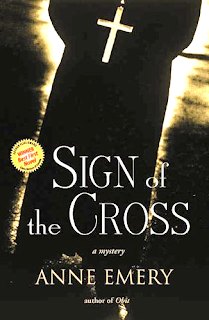 Anne Emery is a Canadian author of eleven mystery novels with Montague Collins, a lawyer in Halifax, Nova Scotia, and Brennan Burke, a priest. She won the Mystery silver medal in the 2011 Independent Publisher Book Awards for Children in the Morning, the fifth in the Collins-Burke series, and the Arthur Ellis Award for Best Novel in 2019 for Though the Heavens Fall, the tenth Collins-Burke. She won the Arthur Ellis Award for Best First Mystery in 2007 for Sign of the Cross (ECW Press, 2006), which introduces the pair to readers and to each other.

Montague Collins is a criminal defense lawyer in Nova Scotia, father of two children and living apart from his wife, who is also a lawyer. The two have a can’t live with them, can’t live without them sort of relationship. Their interactions are alternately hilarious and painful to witness. They are both devoted to their children, and for their sake the pair tries hard to spend family time together, not always successfully.

Monty’s senior partner Rowan Stratton taps him to look into the recent unsolved murder of a teenager. More specifically, to look into claims by a retired police sergeant than one of the local priests was responsible. Stratton is well acquainted with the priest and likes him very much. Brennan Burke is a gifted musician who is setting up a children’s choir for the parish. He is highly educated, articulate, and charismatic. The retired sergeant is spreading the rumor that the dead girl and the priest had a relationship and the priest killed her to hide it.

Burke does not take the rumors seriously at all and will not give Monty information to help clear his name. Even after he’s arrested, Burke refuses to fill in holes in his background that the prosecution manages to fill with unsavory details, lobbing one grenade after another in the courtroom. It’s Monty’s detective skills, not his legal skills, that are called on in this case.

The characters are the most remarkable part of this book. Complex, nuanced, rounded, these people might be found walking down the street, they are so fully realized. Burke especially is portrayed as a multi-faceted human being. The characters make the plot something more than a routine legal thriller. I will say however the text is dense and cannot be scanned. Fast readers generally group words or sentences, and I found I had to look at nearly every single word to fully grasp what was happening. The result was a much longer time to finish than usual. Prospective readers should be aware. An intriguing spin on the legal thriller.

Thanks for this review. I am always interested in mysteries by Canadian authors, so I will look into this one.