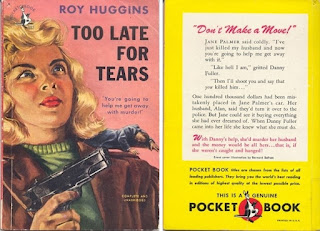 Although best known as a television writer and producer responsible for such hit programs as “Maverick,” “77 Sunset Strip,” “Cheyenne,” “The Fugitive” and “The Rockford Files,“ among many others, Roy Huggins started out by writing novels. His first, The Double Take, is a Chandleresque hardboiled private eye tale. Under consideration here is his second, Too Late for Tears, a psychological crime/suspense novel very much in the noir vein.

Call it what you will¾destiny, chance, serendipity, or accident¾noir fiction seems to have its share. It's certainly the case in Too Late for Tears. Jane Palmer, formerly Blanchard, nee Petry, is a study in discontent, a woman driven by a longing for the dubious kind of respectability that is predicated on money alone and the opulent lifestyle it affords one. When the story opens, she's brooding over what she deems a mundane, middle-class lifestyle and yet another vacuous visit to some of her husband Alan's friends. She tells him to turn the top-down Buick convertible around and drive back to their apartment in Hollywood. He complies reluctantly, wanting to discuss matters, but discussion quickly turns to argument. Alan begins driving wildly until another car, headed toward them, appears suddenly, requiring him to pull over to the side of the road. “The car was big and dark and it hurtled by and the Buick rocked with the impact of the wind¾and something else. Jane saw it. She had thought it a shadow. But she had felt the jar behind her.”

What they find in the back seat of the car is a leather traveling bag full of money¾a great deal of it. When they hear another car approaching, they realize instinctively that it’s the one for which the money was intended. They drive off and, after a chase, eventually elude their pursuer.

Jane is ecstatic at the transformational prospect of having all this money, but Alan is worried that it might be stolen and that he and his career in banking would be ruined if it were discovered that he possesses it. He wants to turn it into the police, but Jane badgers him about keeping it. He finally compromises by checking the bag at Union Station so they can watch the news for reports of stolen money before deciding what to ultimately do with it.

While Alan is at work one day, a man named Danny Fuller shows up at the Chateau Michel, flashing a badge at Jane and wanting to look around her apartment. It soon becomes apparent that he's not a cop but rather the man for whom the money was intended, and he plans to collect it. Jane knows how to work her wiles on men, and eventually persuades Fuller to share the loot with her¾and to help her commit murder.

Do things go off as planned? This is noir fiction, remember, so some things do and others don't, to the reader's surprise and delight, if not to all of the characters'. Jane finds herself having to contend with Alan's sister Kathy, who lives in an apartment across the hall from hers, and with a man named Don Blake¾another of noir's "chancy" conveniences¾who appears rather abruptly and manages to ingratiate himself with Kathy but not as well with Jane. He maintains that he's an old friend of Alan's, a fellow pilot who was stationed with Alan in England during the war.

I found Too Late for Tears to be an absorbing and frequently suspenseful read, if not always lacking in uneven, opportune, and stilted moments. Some of the dialogue, although accurate in its description, doesn't come off as terribly realistic¾e.g.: "When you're up against Jane, you're faced with all the precision efficiency and built-in contempt of a slot-machine." The novel contains some narrative passages that are sheer schmaltzy melodrama and others that unduly attempt to be perceived as "literary." If you don't take them seriously, you'll have a fun ride.

Derringer Award-winner Barry Ergang’s written work has appeared in numerous publications, print and electronic. Some of it is available at Amazon and at Smashwords. His website is http://www.writetrack.yolasite.com/

Hi Kevin,
I found your remark about the dialogue in noir spot on. Sometimes it's melodramatic and sometimes it tries too hard not to be. I enjoyed reading your review. Thank you, Lynn

I did not make the comment. The review is by Barry Ergang so I think you are referring to his review work.