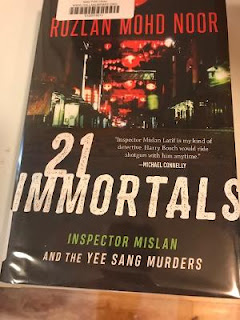 21 Immortals: Inspector Mislan and the Yee Sang Murders by Rozlan Mohd Noor takes readers to Kuala Lumpur, Malaysia. An investigator with Major Crimes, he is sent to a murder scene that is going to prove to be unique as will be just about everything in the case. He has no idea what he is walking into, but the swarming media makes it clear word has gotten out.

Inside the wealthy home and at the dining room table there is a family of three who are all very clearly deceased. All three are fully dressed, sitting in their chairs, with plates and dishes of food before them. The traditional Chinese food eaten primarily during the Chinese New Year to celebrate the holiday, yee sang, is in abundance though there is certainly nothing celebratory here. While it is a murder scene, it is obviously not the primary murder scene.

With an absence of obvious body trauma, it is clear to Inspector Mislan and other investigators that Mr. Robert Tham, his wife, and their ten-year-old son, Lionel, were probably poisoned. They were then stripped, washed, embalmed, and perfumed before being dressed and arranged at the table as if to enjoy the holiday feast laid before them. All three have disturbing smiles as they are posed as if time froze during a happy moment.

Who did this, how, and for what reason are clearly the opening questions in a case that hits a roadblock from the start thanks to a lack of forensic clues. A hard case made harder by the fact that this is a wealthy family with secrets and connections that Inspector Mislan has to ferret out while also dealing with internal police politics, possible corruption in the department, and a host of other matters.

21 Immortals: Inspector Mislan And The Yee Sang Murders by Rozlan Mohd Noor is a complex and interesting police procedural. According to the book jacket copy, the author served as an investigator in the CID of The Royal Malaysian Police as well as other jobs before retiring and turning his hand to writing. This is book one that was first published in 2010 overseas and came out last year by way of Arcade CrimeWise. That life experience clearly shows through and one gets the sense that Inspector Mislan most likely shares quite a number of traits with the author.

There are numerous landmark and cultural references throughout the book as the read is deeply steeped in the culture of the region. No doubt much of that slipped by this reader who had no clue. Imagine trying to read a Bosch book by Michael Connelly with absolutely no frame of reference for the LAPPD, Los Angeles, the state of California, etc., and you have some idea what I was up against here. Additionally, most of the sentences are a bit stilted, making for a choppy read for this reader.

Complicated and very enjoyable if you like police procedurals, this is one to take a look at as 21 Immortals: Inspector Mislan And The Yee Sang Murders is a good one. I am glad I saw the review last month by Jeanne at the BPL as well as this short blurb about the book last month at Lesa’s Book Critiques. The second book in this series, DUKE: Inspector Mislan and the Expressway Murders, is now on the way to my local library branch.

You can also learn more about the author in this Publisher Weekly interview.

My copy came via the Lakewood Branch of the Dallas Public Library System.