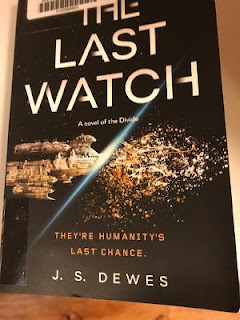 The Last Watch by J.S. Dewes is a debut science fiction novel that serves as the foundational book in a new series. The read is about a group of people called Sentinels who are primarily military convicts. These are people are were convicted of various crimes during their military service or were problem people in some way and were banished to the separate branch of the military known as the Sentinels. Their task is to watch the Divide which is an area of space at the end of the universe. Through the Divide is how aliens have repeatedly attacked in various attempts to exterminate humanity. It has been so long since the last attack that most people believe the aliens are now extinct so the Sentinels are underfunded, underequipped, and somehow, understaffed. So, basically, a science fiction version of the Night Watch from Game Of Thrones.

There are two main characters in this book. Adequin Rake, the female commander of the Sentinels as well as of the Argus, a spaceship near the Divide. The other main character is the new recruit, Cavalon Mercer. He is the disinherited heir of the royal family. A brilliant scientist who nuked his grandfather’s genetics facility for good reason no matter what his grandfather thinks. His very upset grandfather made sure that his grandson was sent to the Sentinels with the goal being that Cavalon Mercer would, hopefully, soon suffer a horrible death.

Everything is relatively normal until the Divide starts moving. Like the canary in the coal mine, the fact that the Divide is moving, means that the entire universe is collapsing upon itself. If they don’t stop the Divide from moving, the Sentinels, and everyone and everything else will die. The Divide is now disintegrating everything in its path. 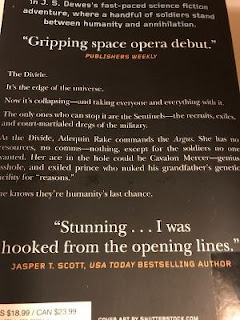 The Last Watch by J.S. Dewes is a funny and action filled book that utilizes plenty of worldbuilding and science to justify this new universe the author has created. The two main leads are very different. Each chapter comes from the pov of one of the two main characters. It is easy to figure out which lead is narrating, based on how they think and see the events in this novel. The tale is heavy on the cliches, but at the same time they work in this context.

The last ten pages surprised me and set up the sequel in a very interesting direction. The sequel, The Exiled Fleet, is on order and in my holds list at my local library branch. I really enjoyed this book despite the cliches and the sequel should be very interesting to read.

My copy came from the Skillman Southwestern Branch of the Dallas Public Library System.