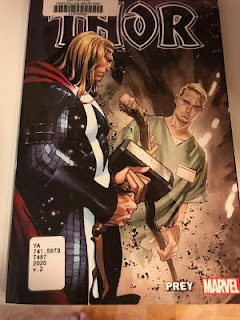 In this book, Thor is experiencing issues with Mjolnir, his hammer. It is not working the way it should. So much for hammer time. Thor decides to visit his old human alter ego, Donald Blake, to see if he can figure out what is going on with the hammer. To do this, Thor must use magic and change himself into Donald Blake. He has not done this for years as Donald Blake has continued to exist in another dimension while Thor has been elsewhere doing stuff. What has Donald Blake been doing all this time and what has he become? As the plot synopsis reveals, Donald Blake has become a villain.

This excellent adventure is built on decades of history. It features various version of Thor, such as Simon Walterson (Frog Thor). Yes, there is Thor that lives on Earth and is a frog. That is as awesome as you would think. 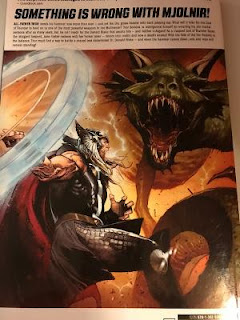 Also appearing in this volume are various characters such as Dr. Strange, Lockjaw, Beta Ray Bill, and others. Thor will need a lot of help to stop the insane Donald Blake from killing every Thor and getting his revenge on Odin. This comic follows up on numerous plot points from other tales, but does so in a manner that even unfamiliar readers will quickly be able to catch on. This volume is just as good as the previous volume while being more graphic and violent since a lot of people suffer horrible and violent deaths.

I highly recommend this book for any fans of Thor.

Heirs of Empire: The Scourwind Legacy Book One by Evan Currie is a military sci-fi drama set on an unnamed world. The empire is one of the ...